NEW YORK CITY — How do you persuade naysayers that climate change is real, that the earth is fragile and needs protection? How do you call people to action to forestall environmental collapse and the natural world’s death?

American architect and sculptor Maya Lin‘s latest effort is “Ghost Forest,” an installation of 50 Atlantic white cedar trees, each some 40 feet tall, and each defoliated and dead. Looming over Madison Square Park like a warning, the trees look cadaverous.

“I wanted to create something that would be intimately related to the Park itself, the trees, and the state of the earth,” Lin tells Hyperallergic magazine about the installation, which will stand through Nov. 14.

Lin obtained the dead trees from New Jersey’s Pine Barrens. Gothamist describes why the trees died: forestland laid waste by extreme weather, the rise of sea levels, and the infiltration of saltwater.

Besides the dead trees to ponder, Gothamist writes, visitors to “Ghost Forest” will hear a “soundscape.” Created by Lin with assistance from the Cornell Lab of Ornithology, the recording features bird calls and sounds of animals that once lived in the New York area but are now extinct. The sounds of more endangered animals will be added, writes Gothamist. In collaboration with Carnegie Hall, park visitors will get an earful of meditative music. As a finale to the project in November, 1,000 native trees and shrubs will be planted in parks throughout New York’s five boroughs.

Given the visual power of Ghost Forest, it’s likely to stay in memory long after it’s removed. Brooke Kamin Rapaport, deputy director of Madison Square Park, credits the staying power of Lin’s work to how she calls attention to environmental concerns with “a minimal visual language of austerity and starkness.”

Lin is good at austere and stark imagery. You may remember that she won a national design competition for her Vietnam Veterans Memorial on the National Mall in Washington D.C. near Arlington National Cemetery. What can be more stark and austere than a lengthy black marble wall, partly buried in the earth and inscribed with the names of the dead and missing?

As Lin saw the memorial when awarded the commission: “I had an impulse to cut open the earth, an initial violence that in time would heal. The grass would grow back, but the cut would remain.”

But here’s the thing. Trees lost to climate change won’t grow back. What will remind us when the memory of Ghost Forest fades? 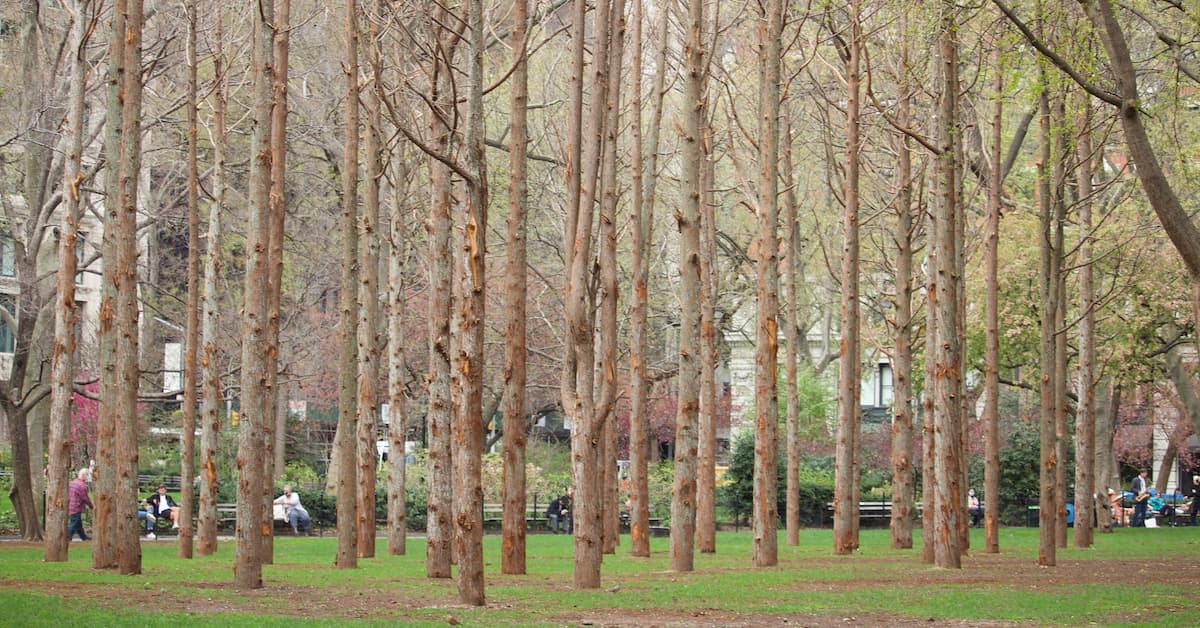