I was born and raised in Ames. My parents and a sister still live there, and I live only 30 minutes away. It’s where I learned about the world, learned to love and accept people who are not like me, and became who I am. Ames is a part of me.

Ames has now given me yet another reason to love it. It’s the first Iowa town to have rainbow crosswalks.

Rainbow crosswalks have been around since 2012, when L.A.-based artist Martin Duvander first proposed them. It’s a cool notion, using streets to show the LGBTQ “pride” colors. It’s even better in person.

“The crosswalks are always so impactful to me,” says Dr. Reginald Stewart, vice president for diversity and inclusion at Iowa State University, “As you’re driving through a community, not even looking for the crosswalk, you just make a turn and you come up on them. It’s a pretty powerful symbol.”

Seeing what community believes, in broad daylight, can either make or derail your day. For example, I was constantly disheartened during the last presidential election to see Trump placards outside of my neighbors’ houses. It was a slap in the face every time I saw one, knowing the people who posted them were okay supporting a man who spouts such hatred for women, people of color, LGBT people, and so many others.

But now, anyone who drives by the intersection of Douglas and 5th sees the opposite. With a glance, they know Ames supports and welcomes people from the LGBTQ community.

“It says a lot.” Kellie Smith, a transgender woman living in Ames, says. “It says that people are actually looking out and know that we’re here. They are trying to be inclusive. It is a good gesture.”

“We believe this is an opportunity to communicate to everyone in the city of Ames that everyone is welcome here. This is one way we can demonstrate that.” Ames Mayor John Haila said at the ribbon cutting ceremony, next to the four new crosswalks: two in inclusive pride colors, one in gender-nonbinary pride colors, and one with transgender pride colors.

This is the Ames I know. It’s the town that helped me become an LGBTQ ally, a welcoming town, with many welcoming people. Of course, there are always those who are perhaps a little less welcoming.

The day after the ribbon-cutting, the Federal Highway Administration (FHWA) sent a letter objecting to the crosswalks and asked Ames to remove them. City officials determined there was no evidence of the FHWA having jurisdiction over the roads in Ames. The FHWA acknowledged it knew of no penalties it could levy for keeping the crosswalks. At this point, the Ames City Council is ignoring the letter and keeping the rainbow crosswalks.

“If you work in the business of equality and inclusion, nothing surprises you,” Stewart says. “You prepare for pushback, because you know it’s always going to be there. It is disappointing, sure. But change takes place over a very long arc, and the people who are truly committed to building inclusive communities and institutions, you just stay with it.”

A rainbow crosswalk is only one step. “It’s a symbol.” Stewart says, that needs to be reinforced by “deeds and actions.” For example, having unisex bathrooms to help transgender people feel more welcome is one such step.

But the crosswalks are big – even bigger because of the city’s strong stance in defiance of federal officials. I am so honored to call Ames my hometown, and touched by its latest commitment to be an inclusive community.

“I don’t want you to think of it as paint on the ground.” Stewart said at the ribbon cutting. “When you think of this intersection, think of it as the new welcome mat to our city and our home.” 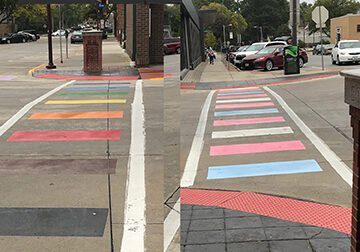