For many, this seemed like a long overdue policy change. Others said they would believe it when they see it. For me, this policy fails to address the harmful and hateful things on social media that do not meet the criteria of “white nationalist” or “white supremacist”.

For example, even Facebook admits this new policy wouldn’t touch holocaust deniers. All the anti-immigrant, anti-muslim, antisemitic, pro-Trump garbage is here to stay. Also, how would this policy affect people of color who post things that some people deem as “nationalist”? The libertarian in me says his policy is slippery slope — and I was right.

In a previous column, I wrote about my many stints in “Facebook jail” — periods of time when my posts attracted Facebook monitors who limited my access for 30 to 90 days.

Since that column was published in January, the assault on my speech has continued. I was almost immediately back in Facebook jail when the column first ran. What was the terrible offense? I said “old white d*ck”. I was marked AGAIN for not meeting community standards and hate speech. Yep, hate speech.

I posted an updated mugshot of a Dallas man who had punched a black woman several times when she tried to call 911 after he pulled a gun on her. The man has a history of saying racist and misogynistic things about black people, especially black women.

My post included the words “Different look, same punchable face. Go get em.” Facebook removed the post and cited me for harassment and bullying. Yep, bullying.

I have asked for another review of this latest violation, but I am sure nothing will change. Black activists and allies will continue to have their speech policed by Facebook, while the alt-right and Trump supporters keep getting away with their covert and veiled racism, xenophobia, islamophobia, homophobia and antisemitism.

This is why I think the new Facebook policy is b.s. It will not target the people who are doing real harm and promoting violence online. It will not stop those who flirt with the alt-right and white supremacy from attacking marginalized people.

It will not get rid of spaces that use Facebook to organize their tiki torch marches. But it will continue to monitor people like me: righteously angry people of color who are sick and tired of seeing their communities being verbally and physically attacked by bigots.

I originally said I was done with Facebook. That I planned to voice my views on other platforms. I also know that my words are sometimes inflammatory, and that my life would probably be easier if I just kept my big fat mouth shut. I know I would probably stay off of facebook’s radar if I just chose my words wisely.

But I’m saying “HELL NAW”. They are not gonna run me or my friends off.

I know Facebook will continue to police my speech, and I am ready to take any punishment for those views because I will not be silenced. I am not gonna feel sorry for going after bigots who do my community and other communities harm. So, I guess Facebook and I are at an impasse.

What are the next steps? First, I would love to hear your suggestions for confronting Facebook; I know I am not the only one going through this. Three other black activists are also doing 30-day stints. Two others just got access to their pages recently.

In the grand scheme of things, losing access to Facebook may at first seem trivial and petty. But as I wrote in my previous column, social media plays a major role in the organizing process for many activists. And with 2020 elections around the corner, words and feelings are heating up. Who will facebook silence next? 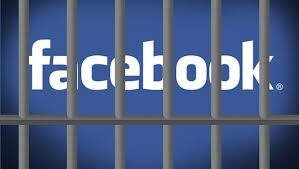