I’ve been anticipating a bleak mid-winter kind of holiday season, ever since fall started.

My mom is in the nursing home with dementia, and the thought of getting out all of the holiday stuff was feeling a bit overwhelming. Then came a number of hard-hitting deaths in my congregation.

But God sent to me a “Joseph and Mary” in the most unusual way: Ines and Ronald, two asylum-seeking refugees with child who are fleeing from government persecution and somehow ended up at my church, Metropolitan Community Church of the Quad Cities.

It all started for the two, whose last names we’re withholding for their protection, in January 2021. That’s when Ronald tried to better his life while living in Cameroon and took a job on the “wrong side of town” in Yaunde, Cameroon’s French-speaking capital city, where English speakers are persecuted and a dictator’s been in power for 40 years.

Ronald took a job as a driver for a wealthy plantation owner, and two days in, he and his boss are held hostage on the side of the road. Though his boss paid the kidnappers’ demanded ransom and they are released, a week later the military invades and assassinates his boss, torturing Ronald for three days and threatening his family and Ines.

Somehow, Ronald escaped after being repeatedly beaten with a rifle, forced into a water tank, and cut. He still has a scar on his arm where they cut him with a jagged lid of a paint can.

He escapes into the fields, and finds a neighbor willing to dress his wounds and pass him on. With the government still looking for him, Ronald is passed from house to house for several days. Eventually, a friend of his dead boss reaches out, wanting to smuggle Ronald and Ines, who is now pregnant, out of Cameroon and into Nigeria.

It’s a spy thriller situation: the couple finds a way across the border into Nigeria and are passed from person to person, strangers. They eventually make it to Ecuador, with the goal of reaching the United States.

In Ecuador, they travel mostly by foot and a little bit by bus. They wade through chest-high water in Columbia, seeing a lot of death. Ines is scared of water now; she didn’t used to be, but after seeing so many mothers give up in the water and send their babies downstream, she’s scared.

They keep on walking through the countries of Central America: Panama, Costa Rica, Nicaragua,  Honduras. Finally they arrive in Mexico and the river that borders Texas. They’re apprehended immediately by Border Patrol and are taken to a detention camp.

Ronald and Ines are moved from one camp to another, with no idea where they’re going or whether they’ll be sent back to Cameroon. Ronald is still hurting, and Inez begins to bleed.

She’s brought to the attention of World Relief, an international nonprofit with an office in Moline that provides emergency assistance to needy people worldwide. Because of her high-risk pregnancy, Inez is brought to the Quad Cities.

Her first placement was not a pleasant one, and she asks to be moved. That’s where my church comes in. When I saw all of this, I thought, “My gosh, we have to do something.” My church provided a host family in Illinois, where (unlike in Iowa) Ines qualifies for support to obtain food and health care.

Meanwhile, somehow Ronald was released from the detention camp after being separated from Ines for two months. I still don’t know, nor does World Relief, why he was released though we assume it is related to the Biden administration’s strategy of keeping families together. But we and a couple of church members joined Inez to meet him at the airport for the reunion.

I remember Ines looking at me with a “not daring to hope” look in her eyes when she asked about where Ronald could stay. When she learned he could stay with her,  she literally went to her knees to thank me. It was the most embarrassing thing I’ve ever experienced, but also a moment I will never forget; she was so moved.

That was just the beginning: the outpouring of love from my church and the community has been astounding.

Ronald didn’t qualify for medical services like Ines did. His back was hurting so bad from the injuries he had received. We were able to get him into the Palmer Clinic of Chiropractic free of charge.

He broke his phone, which is his lifeline right now as he navigates a completely alien world and a different culture with a different language, and tries to communicate with his family back home.

Just before we were headed to the phone store to see if they could fix it, a loving, kind soul showed up to donate $100 to Ronald and Ines. Problem solved.

Ronald’s mouth hurt so terribly, because of an abscessed front tooth.  A church member happened to ask their dentist if they did pro bono work, and now Ronald is being taken care of and is on antibiotics. Plus this dentist agreed to examine Ines’s teeth, too.

Scott County Supervisor Ken Croken did a fundraiser. Another church member is holding an online fundraiser for Ronald and Inez right now. A few weeks ago, we held a baby shower at the church for Inez.

I know it’s all going to fall into place.

So many people have been incredibly generous and loving to Ronald and Ines. Every time we’ve worried about how we’re going to make this work, it has become “God’s got this. The community has this.”

It’s been one thing after another — reminding me, almost beating me over the head, with the extent of human goodness and kindness. I so needed that, and am so fortunate to have this incredible experience.

I also have the joy of experiencing all of the firsts of Ronald and Ines. I’m getting to witness their first snow, their first festival of trees, their first Thanksgiving. Suddenly it’s not a burden, but a joy, to decorate my house for the holidays. Or share the English language with this incredibly warm and delightful couple. To share the craziness of life.

Ines and Ronald grinned from ear to ear when they read this. Their English is still limited, but they still shared about their feelings. “I am very very very happy to be in the United States this Christmas,” Ronald said. “Not ‘very happy’ – ‘very, very, very happy!’ ”

“I am also so happy for the baby that is coming,” Ines added. “Every day, it is all we talk about!”

These two people, and my congregation, have helped me open up my heart. They’ve reminded me of the fundamental human kindness that exists in the world. Because of them, the story of Christmas is reborn for me once again.

As LGBTQ persons, we know what it is to experience government persecution and what often feels like being a stranger in a strange land. My hope and prayer is that everyone will come to understand the need for all of us to stand together against oppression and to open our hearts to the stranger in our midst. 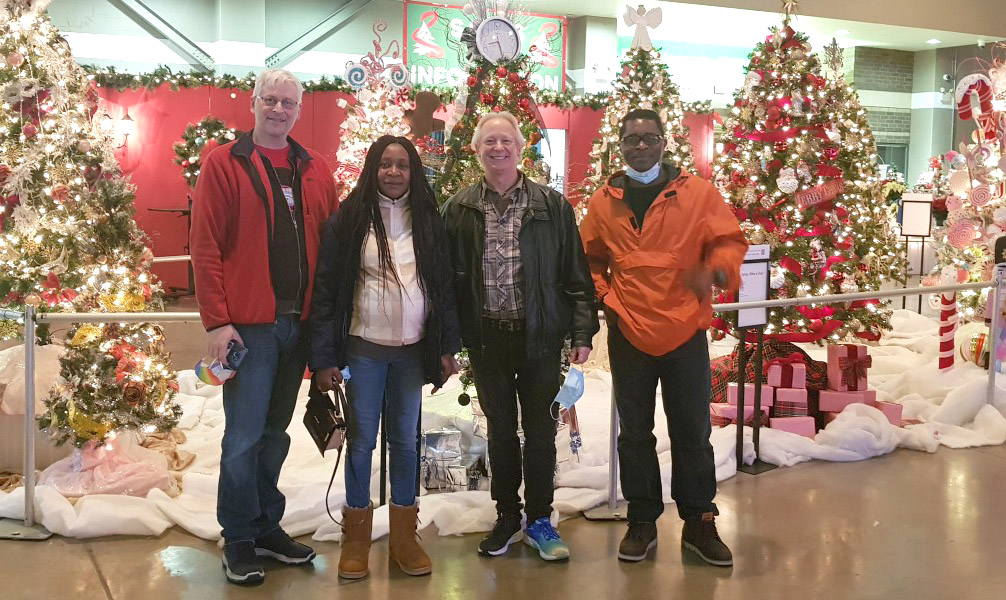