Climate change affects Iowa in a very real way, affecting our crops and our personal health.

“Greenhouse gases are warming the atmosphere and the oceans, which means more evaporation.” says David Osterberg, a professor of environmental health at the University of Iowa and the founding director of the Iowa Policy Project.

Even an increase of just one degree has a dramatic effect, he explained. That heightened evaporation leads to heavier rainfall, which has led to record-breaking flooding this past year.

The floods in 2019 cost Iowa around $2 billion, affecting businesses, homes, roads, and fields. What used to be seen as a “hundred years” flood (likely to happen every 100 years) is becoming more and more frequent, says James Boulter in his paper An Uncertain Future. As climate change increases, so do the frequency and intensity of Iowa’s floods.

Climate change affects Iowa’s agriculture in many ways. It has caused a Goldilocks climate, a term coined by Eugene Takle (director of Iowa State University’s Climate Science Program). It’s meant to refer to how Iowa has historically received just the right amount of humidity, heat, and rainfall for optimum crop production. But it will not last.

There is an ongoing trend of decreased productivity.” William Gutowski, professor of meteorology at Iowa State University, says. “Flooding and intense rainfall is already starting to decrease crop productivity in Iowa.” Increased rainfall makes it harder to plant crops at the desired time, Gutowski says. If the fields are waterlogged, farmers can’t plant their crops with heavy machinery, because it sinks into the ground.

More humidity increases the growth of molds and fungi on the crops, Takle and Gutowski say in their Physics Today article “Iowa’s Agriculture is Losing its Goldilocks Climate.” Greater humidity and cloudy skies trap infrared radiation and cause warmer nights, reducing the crop yields.

Farmers have adapted to climate change in many ways. They are trying to use seeds that can handle greater moisture. They’re also planting faster, draining their fields, and shifting to growing different crops, Gutowski says.

People and plants adapt to their climate, and they continue to do so, he says. It’s just a question of whether Iowa’s farmers can adapt fast enough.

Iowa’s warmer summers mean more bacteria that can contaminate drinking water or the  lakes and streams in which we swim. These bacteria can cause skin and eye irritation, respiratory illness, gastrointestinal illness, and liver and kidney disease. 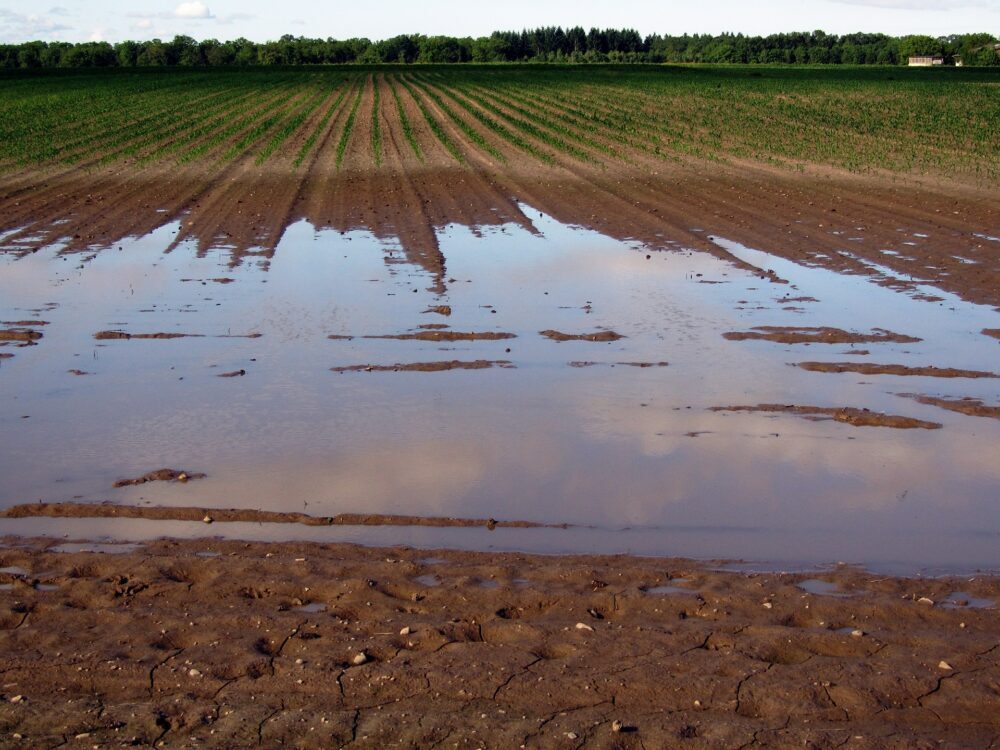