It’s perhaps the best-known LGBTQ+ nonprofit in the Quad Cities, founded in 2018 and gracing local airwaves and headlines ever since.

Yet, Clock, Inc. LGBTQ Center has an identity crisis. Its success in reaching out to youth has left much of the community unaware of its desire to also provide support service for adults.

With an expanded staff , and a grand opening April 28 to showcase its new renovated space, Clock, Inc. aims to change that.

The group best-known for its youth and transgender outreach is aiming to reach more, farther and deeper into the Quad Cities and beyond – and especially the area’s adults.

“I’d love to see some sort of Black coalition within the community.” she said. “There are heaps more issues when it comes to being Black and gay, or Black and trans’ in the community, and I don’t feel those are issues for white people to tackle…. we need Black and brown people diving in and fixing them!”

The grand opening April 28 , at the new headquarters at 4102 46th Ave,. in Rock Island, comes almost a year after Clock, Inc. relocated from its original home in downtown Rock Island, where founder Chase Norris built the group from a master’s degree project to a visible, path-paving nonprofit.

Mostly youth could be found at the center throughout the day, either enjoying judgment-free socializing they couldn’t find elsewhere, prepping for events or gathering for support groups.

A  list of counseling clientele for Norris and Clock, Inc. grew to where it now has a waiting list of almost 40, center officials say. “I’m the only active, out counselor that’s within driving distance that’s within your trans community,” Norris said. “People don’t want to have to explain what it is to be trans.”

Norris could often be seen on local television stations or picking up thank-yous or award checks from local organizations.

But still, organizers say, Clock, Inc. needs more support. “Funding is a constant struggle,” Mauer said, noting it costs about $12,000 a month to run Clock, Inc. fully. She and Peters said the center wasn’t sure a few months ago whether it could keep the doors open.

“So now is the time when we need to put our feet in the dirt and make sure everyone, of every age, knows this is for everyone.”

The newly renovated space is packed with new amenities:

It’s located right next to a bus stop and also has plenty of individual parking spaces.

The space is three times as large as the original center in downtown Rock Island. It includes room for intern offices, gatherings, larger public events, and a massive trans clothing swap closet, divided by gender. The common space features a sound system and stage and can be broken up into smaller spaces if necessary.

Another ongoing effort by Clock, Inc. is LGBTQ+ education for area businesses and nonprofits who want to learn more about sensitive pronoun usage, workplace sensitivity, and more.

Spreading word about Clock, Inc. as an event space, available to groups other than itself, is also important for diversity in the LGBTQ+ community, Peters said. A former bartender who values the joy of sharing some drinks, Peters said it’s equally important to have spaces where conversations can occur more easily without being “fueled by alcohol.”

Organizers are also thrilled to see attendees from smaller communities farther outside of the Quad Cities, such as Eldridge in Iowa and Morrison in Illinois. Though it’s good to see Clock, Inc.’s deeper reach, Peters said, it’s also “terrifying …. you know they are clearly struggling in their communities and not finding their community there.”

Peters also said he will be focused, in his new role, on fostering an overall spirit of “empowering our full umbrella.”

“This (gesturing to his phone) was supposed to bring us all together.  And it has maybe torn us apart more. I’m seeing the struggle of the community and how it’s broken from the apps.

“We’re separated from COVID, and we’re still feeling that isolation. Yet we’re not coming together. I just think this is a time that we need to be really lifting others up. And putting the spotlight on that.” 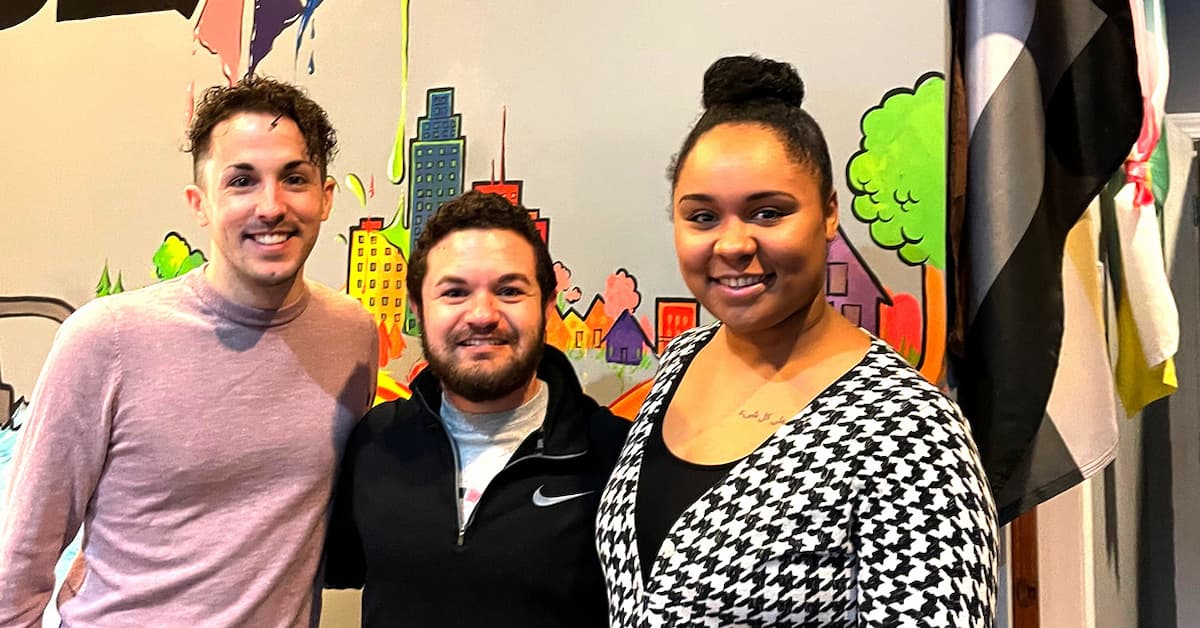