My first devastating experience with “social media” has never left me, I confess.

It was around 1993, 10 years before Facebook was invented, and 20 years or so before it became a staple of everyday social life. “Social media” back then consisted of chat rooms. I lept in, fingers first and quickly obsessed.

Within a few days, I had found a lesbian chat room and finally shared the story of my first-ever high school lover and how we extended our love affair into college — all “in secret,” but not really, since literally everyone we knew also “secretly” knew about us.

But I’d also delved into a chat room about banking fees. I dared to make a point that is en vogue now, but was unheard of at that time: why do banks seem intent on charging the greatest amount of overdraft fees possible? This was before banks instituted policies that ensured lower-cost items went through first — rather than the customer-gutting approach of sending through the big debit so that we losers ended up with hundreds of dollars in overdraft fees, rather than just $36 and change.

Daring to question overdraft fees, in that chat room decades ago, left me besieged with insults. I must be an adult failure for even raising this question, many said. What kind of irresponsible person would waste time questioning overdraft fees instead of just being more careful with their money? Why was I spending money I didn’t have? Why did I expect some bank to foot the bill for me?

I waged a war of words for weeks — against what I later realized were likely people hired for the specific purpose of shutting down questions like mine. Back then, I naively thought I was arguing with other regular humans, not hired word warriors or bots. Back then, I briefly and naively believed this new thing called social media had already lived up to its promises and led me to new truths about myself by exposing me to more human perspectives.

We all now know: the experience of feeling trashed, belittled, devalued, and “cast out” because of social media is universal. Every single one of us will encounter it sooner or later, and many of us encounter it all the time or are constantly living each day to head off such a nightmare — and we don’t even realize it anymore. Research shows that only 5 to 10 percent of Americans believe social media has an overall positive effect on us: we are almost all painfully, secretly aware that social media leads to increased depression, anxiety and feelings of isolation.

Imagine getting just over seven hours of sleep each night instead of eight (something many already struggle with because of social media obsessions). Think of leaving the one-hour family dinner and sitting in the other room disengaged from the table, hovered over your phone, for six minutes. What’s it like to involuntarily miss more than 12 minutes of a good movie?

Facing a 45-minute commute to work? Stop and look at your phone for just under five minutes, and see how your stress level fares. That half-hour of cardio you’re looking forward to? Sit idle for just over three minutes looking at your phone (in front of your trainer, or a mirror, for extra effect). See whether those exercise endorphins can make it through the flood of cortisol as you grow anxious from your forced inaction.

When you begin to see it this way, social media is truly the challenge of our era.

For the marginalized groups we aim to serve through The Real Mainstream — LGBTQ+ people, women, Blacks, Indigenous and other People of Color — social media is an even bigger challenge, with even bigger impact.

Teenage girls — meaning the women of tomorrow — are far more involved in social media than boys, and far more damaged by it, in far more ways, reports CBS News.

Black people are far more likely to both use social media for more meaningful purposes, reports Pew Research — AND to believe that their social media efforts actually make a difference. In addition, Black youth are at an even greater risk of social media’s dangers, says another study: “adolescents of color spend 4½ more hours per day on average than their white counterparts using various forms of media, including mobile device,” says the American Psychological Association. This exponentially multiplies the threats youths of color face from social media.

For many of us, especially marginalized people in the small and/or rural Iowa and Illinois communities we are seeking to reach, social media is also a lifeline. It’s the only way we can find others like us. Without it, we’d be stuck alone among a sea of people telling us we don’t fit in, we’re not good enough, we need to believe what they believe, we should question our instincts, second-guess ourselves all the time.

Turns out, as we’re all now discovering, social media still leaves us exposed to these same dangers. But often from the very communities, identities, and people we turned to for protection from those tactics.

Our addiction to social media is so bad, we have even developed physical syndromes directly related to using smartphones too much. “Text neck” is a real syndrome, characterized by a cramped neck with limited mobility. A neck stuck too long in that one obsessed position, tipped for optimal texting, internet browsing and social media posting and perusing.

Social media is among the first topics we vowed to cover, when we first began publishing in December 2018. It’s one of the reasons we are resuming our print product after an 18-month hiatus because of the pandemic. It’s why we’re keeping print a top priority, to add another solid brick to the wall of protection against social media’s dangers. Something about the structure, intimacy and tactile nature of print media helps offset the often covert, passive-aggressive, and unaccountable world of social media, that often brings out the worst of us while simultaneously convincing us we’re showcasing the best of us.

Personally, that online group attack I experienced decades ago is now just one of many social media traumas, the scars of which my psyche will forever bear. As an early adopter of sharing links, pre-Facebook, I remember such early irritation among so many current prolific posters. In the early years of Facebook, some of my childhood friends from more isolated areas of the Midwest would routinely question and trash the talents of celebrities with marginalized identities, leaving me seeing Facebook as a harsh, prejudiced and emotionally dangerous place.

My early 2017 critiques of Donald Trump — including what a rude husband he’d been to his wife — earned me especially harsh putdowns from some of the most powerful social media voices on my feed, who also happened to be among the greatest terrors of my childhood. I’ve also been group-friended, and then group-unfriended, by people I’ve never met or spoken to directly, their strings being pulled unknowingly and out of balance by the most powerful social media influencers in their sphere at the time.

I’ve had to guard across two states against false rumors spread based on mere minutes of a Messenger exchange. As a political consultant, I was required to limit my social media visibility in the interest of my client candidates. Same when working as a traditional reporter. As an indie publisher now, I’ve been told by real-life readers and supporters that they’re afraid to press “like” on social media for fear of retribution from powerful people within and/or outside of their LGBTQ+, women’s or BIPOC community. Quite honestly, I consider the fact that I’m even ON social media to be an act of bravery.

Now, with the cavalcade of subversive bad influences on social media, I see it as an obligation. I see it as every responsible citizen’s duty to start adjusting their understanding of, and use of, social media. Stop thinking that you are somehow above the harm it does. The more you believe you are above the fray, the more likely it is you are enacting the damage without even realizing it.

I’m not encouraging any toxic positivity, not encouraging any path of posting only things everyone agrees with. In fact, the false appearance of solidarity that social media provides our dopamine receptors through superficial interactions that discourage true communication (and critical thinking) is perhaps THE greatest danger and threat social media poses. (As I’ll often say, check out Black Mirror.)

I’m talking about real-life complications that used to occupy more of the time social media now takes from us, voluntarily. Things we sorted out in different ways than snarking at each other on social media; walling off with our strongest supporters; blocking, ghosting, or showing intentional disregard for those we disagree with; and now, in the most disturbing development, increasingly patting each other on the back for all of those bad habits.

We are complicit, compounding social media’s damage. We’ve deluded ourselves that essentially flicking off a digital switch and leaving misunderstandings to fester and spread is somehow noble or self-empowering. It’s not. It’s no more brave than pressing the button on your TV remote.

Now that everyone and research are all being more open about the devastation of social media, I feel empowered to be more open, too. I no longer have to sit here and try to coach myself out of the agony it has caused me. I can leverage it for good by sharing it, putting it in greater context, and pressing for a better way, just like we’re pressing for a better way in social justice and gender understanding.

I’m literally, deeply, urgently concerned about our future — as humans but especially as LGBTQ+ people, as women, as BIPOC people and their allies like me. Social media is more than a habit, as you’ll read in this series; it’s an essential factor shaping our future, determining our values, and soon will directly impact people’s perception of reality more vividly than ever before.

With Donald Trump fast re-emerging to rally his steadfast supporters, who remain closely bonded through social media despite the fact that he himself is banned from using social media, now is not too soon to start being more vigilant. Social media is increasingly, urgently and vastly impacting our psyches, beliefs, responses to conflict or challenge, self-esteem, our loved ones, those we dislike, our communities, and our futures.

Please spread word about what you learn in this series, including the sobering statistics in this column right here: I am certain that many of us, especially many leading or social-influencing marginalized communities, have fallen numb. Regardless of how “woke” we are to all other things, many are asleep about the dangers of social media and are so deeply vested in it, we are actually part of its damage. So many have actually become feeders of the very worst effects, without even realizing it, and breaking that cycle takes foresight, research, commitment, and bravery. Because as we all know with social media… you, your emotions and your reputation are in for a bruisin’ if you dare to challenge an influencer.

We need to discuss this openly, deeply, honestly and not personally. Because social media has inflicted enough subterfuge, deception, “highlight reels,” overly personal responses to things that are broader than that, and distortion through encouraging surface, binary perceptions. We need to wake up. You need to wake up. We’re trying to do our part, and we hope this series will help inspire you to do your part, too. Thank you for taking these 15 minutes to read something other than your social media feed. 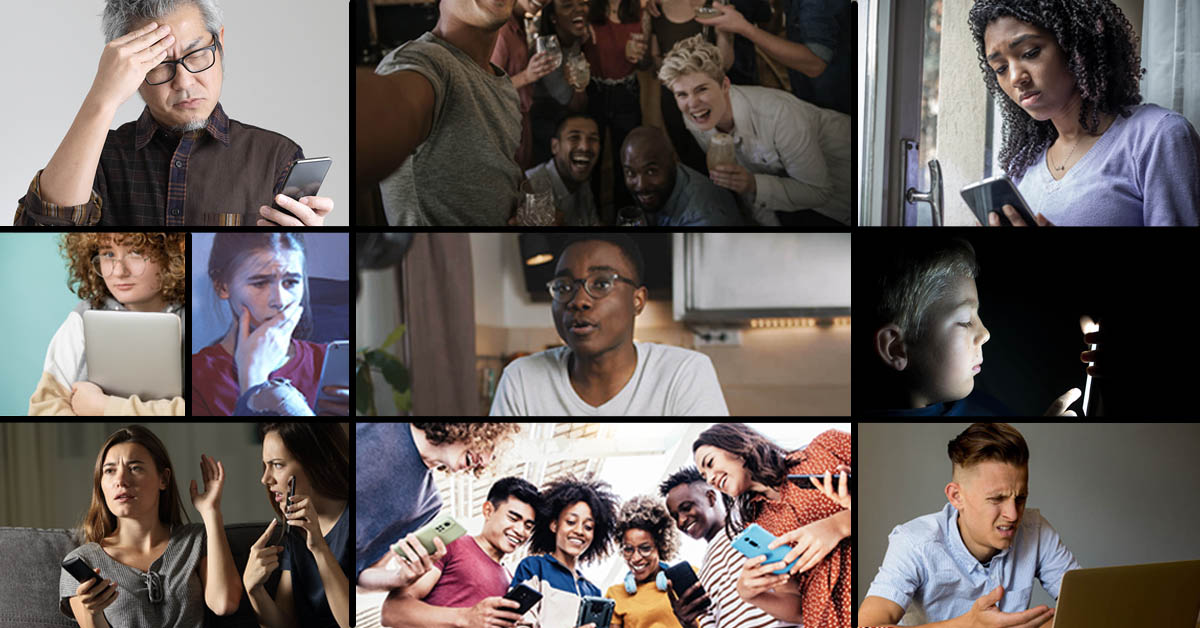