Soon, we’ll be seeing a lot of posts and articles about getting rid of the Electoral College.

The “one human, one vote” solution is popular, but it has many problems. The first is an assumption that voter turnout is equal across all 50 states. Of course, that is not the case.

Second, POTUS is not the only issue on the ballot in November, when 11 states will choose their governors, and 33 states will choose Senators. The contentiousness of those races often affects the percentage of eligible voters that turn out.

Third, many states allow ballot initiatives to appear on ballots.  Some of these initiatives become lightning rods for voter turnout.  Think back when many states put marriage equality on the ballot.  That caused a very atypical election in many states.

Fourth, geographic differences influence beliefs and needs differently within a state or region.  Candidates are aware of this, and campaign accordingly. Under a “one human, one vote” system, POTUS candidates would give all of their focus to states with larger populations, like New York and California, while ignoring less-populated states like Missouri and Iowa.

A broad national agenda would be sacrificed, replaced by the unique needs of large population pockets.

Finally, going with a national “one human, one vote” system could mean our registration would eventually end up under the federally-controlled  Department of Homeland Security (DHS) rather than with states.

A chilling reminder: when Donald Trump took office, one of his administration’s first requests was for the states to send their voter rolls to the federal government.  Only a few did;  thankfully, most said no.

Yet, we still need to change the current system of the Electoral College. One reason is the “winner-take-all” set-up of rewarding Electors to candidates. This system is in place in 48 states, where a minimum 50 percent plus 1 vote gives ALL electors for that state to one candidate.

Especially in states where the vote is likely to be close, that means up to 49 percent of the voters did not count!

I recommend that we keep the Electoral College, but adopt the system in place for Maine and Nebraska. They use a formula that awards Electors to candidates based on the percentage of the vote that each candidate won.  Have you noticed that when the Electoral College vote is reported, there is usually a fractional part?  That’s Maine and Nebraska, where all voters counted.

This change could be made in 48 different State Legislatures, or it could be instituted via a federal voting rights law that mandates percentage awards of Electors. The Supreme Court has recently upheld that Electors who don’t vote as assigned by the voters they represent can be sanctioned, so judicial precedence exists to support this system.

The original Electoral College was created during a time when the Electors had to ride their horses to cast their votes. We don’t have that situation anymore; no valid reason exists to keep Electors as physical bodies casting the final POTUS votes, other than the hassle to change the system.

One more added advantage exists to percentage awards, and it may be the most important in this era of extreme partisanship.  The Maine/Nebraska system, where Electoral College votes are apportioned based on the percentage of vote earned by a candidate, would open the door for third parties to gain recognition by the electorate. It would finally give them a legitimate chance to have a chance.

Broadly, over time this system change may lead us to a Congress that legislates through compromise, rather than by the letter (R or D) after their titles.

This outdated “50 percent plus one”  is no way to choose a leader.  The Maine/Nebraska “percentage awards system” is the way to go, for so many reasons. Getting it in place requires bipartisan agreement – so the time to start pressuring our legislators is NOW. 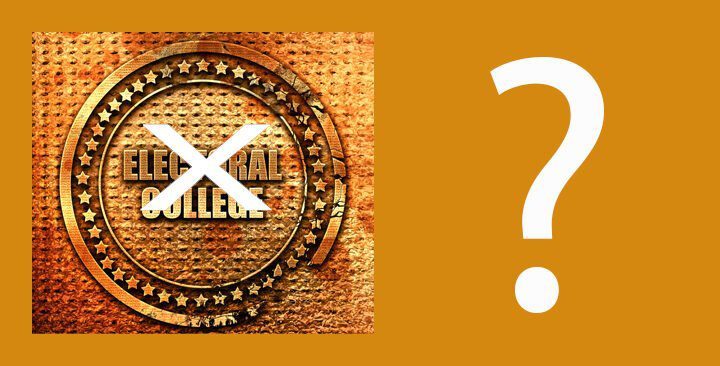