IOWA AND ILLINOIS — As the nation and several groups throughout Iowa and Illinois honor the one-year anniversary of George Floyd’s videotaped murder at the hands of four Minneapolis police officers, police ethics are under the spotlight anew both locally and nationally.

And while Officer Derek Chauvin will serve life in prison for the murder of Floyd, more devastating videos of other Black men mistreated at the hands of police are joining with local police-related controversies to increase tension — all under the shadow of a federal partisan stand-off over a bill intended to hold police more accountable.

Today, which is the anniversary of the nine-minute suffocation of a handcuffed, prone Floyd by officers, only a few memorials are happening in the Illinois-Iowa area — in Des Moines, Chicago, and Carbondale. Minneapolis holds a day of events that are being televised in different online news stations, and the Global Memorial to honor Floyd offers a 9:29 meditation to memorialize Floyd and the changes still needed.

The agony over policing continues locally and nationally:

• In Rock Island, protesters turned out in force at a Monday evening city commission meeting speaking out against what they felt was attempted intimidation of citizens en masse by Rock Island police officers, reports the Quad City Times. At a May 10 council meeting, 50 officers showed up in full uniform carrying tasers and weapons as a show of objection to a council member’s press for greater clarity on the city’s foot patrol policy.

The existing tension initially grew out of concerns over the police killing of a Rock Island man who hijacked a woman’s car, and dragged two police officers hanging from the car’s windows, and backed the car into a gas station a day after threatening police on video. It has since transformed into a debate over the ethics of police officers utilizing their taxpayer-paid uniforms and equipment to make a statement against a council member. That council member is Dylan Parker, who has asked the department for greater clarity on foot pursuits, triggering not only outcry from local police leaders demanding his apology but also Mayor Mike Thoms’ demand for his apology.

• In Des Moines, the police department faces a new lawsuit filed last week over charges one of its officers hog-tied a man and threw him to the ground, reports the Des Moines Register. The same officer faced an earlier charge of the same several years go.• , the Register reporter last week of a case of a man who nearly died in police custody after being “hog-tied” https://www.desmoinesregister.com/story/news/crime-and-courts/2021/05/20/des-moines-police-department-officer-michael-fong-sued-hog-tying-man-suffering-seizure/5153982001/

• In Iowa City, Iowa Freedom Riders activists succeeded in convincing the Casey’s corporation to remove an armed security guard at their store on Broadway, saying it cast a needlessly negative light on the surrounding neighborhood.

• Nationally, questions are growing over the recently revealed torture-to-death of Ronald Greene in May 2019 by Louisiana State Police officers. The tape of their behavior — which included tasing, kicking, beating and dragging Greene while also mocking him, expressing disgust and cursing — was only released within the past few weeks and only after a portion of it was leaked to media. No action has yet been taken against the officers involved, one of whom has since died. In addition, questions remain over the police killings of Daunte Wright and Andrew Brown Jr. In Wright’s case, the officer involved is facing charges. In Brown’s case, all of the officers involved were declared by the county prosecutor to have acted reasonably.

Video has also been released of an Army sergeant threatened, maced and humiliated by North Carolina officers last winter.

Here are a few opportunities today and in coming weeks to stand up against police brutality and bad police ethics, and to memorialize Floyd:

• Chicago: Join a memorial at The People’s Church of Chicago today, with signs, at 4:30 p.m. today.

• Carbondale: Join a march at the Carbondale Pavilion at 5 p.m.

• Des Moines: The No Justice No Peace PAC and the Interfaith Alliance join to host a memorial for Floyd at 6 p.m. tonight at George Pappajohn Park.

• Bettendorf: Gather outside the Bettendorf Police Department May 29 to stand up against police brutality.

“In it all I weep for George Floyd, his family and the black community,” writes the Rev. Dr. Dan Collison, who created the video. “And, I see black liberation as the larger vision of all that is in the air that seems to move in and out of focus like the lens of my camera. I can’t look away. I won’t look away.” 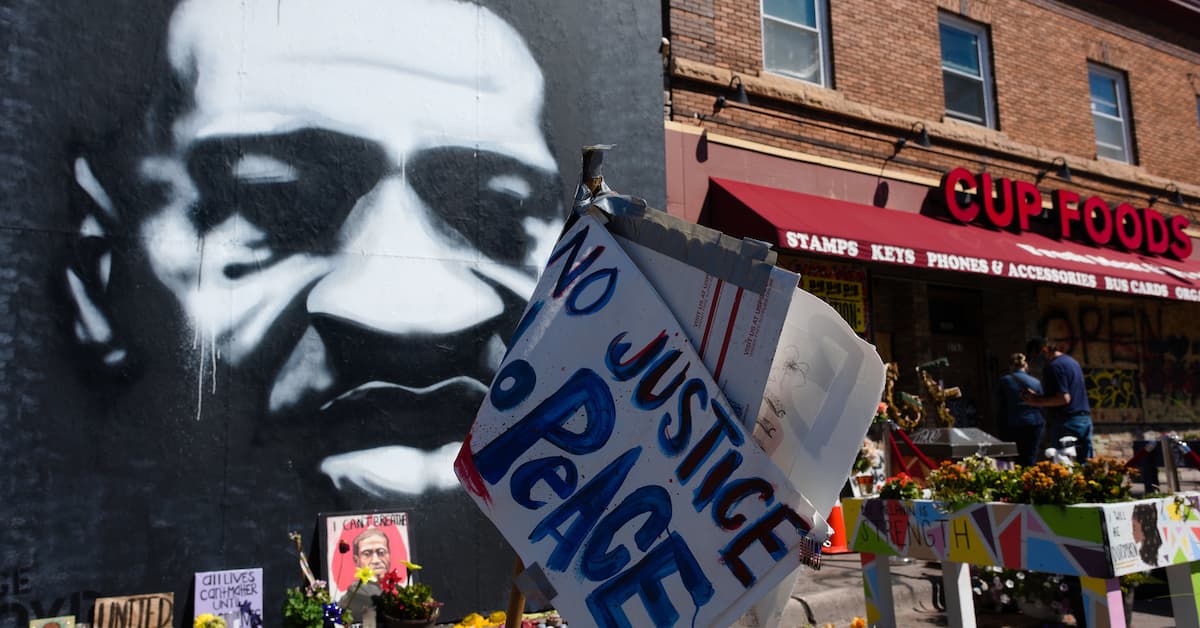