MOLINE – From a civil rights perspective, the latest brouhaha over After School Satan Clubs is a no-brainer: schools that allow proselytizing, fundamentalist Christian “Good News Clubs” have no right to turn away non-proselytizing, non-religious groups even if they include the word “satan.”

But in terms of what’s really going on inside of us, and what we do and say when gathered privately, the brewing confrontation between After School Satan and Good News is really just beginning.

In case you haven’t heard or read (though that’s hard to imagine based on social media feeds and local media), Moline, Il., in the Quad Cities made national news in mid-January. An After School Satan Club started at an elementary school there, the first in the country in six years.

The controversy also quickly subsided, as that wonderful thing called context emerged. More on that later.

The Good News Clubs, run by a nationwide organization called Child Evangelism Fellowship, seem to realize that they cannot argue with legal principles that have paved the path for their own evangelism, and others like it. In Iowa City, for instance, the University of Iowa is paying  almost $2 million in lawyer fees for trying to limit gatherings by a Christian group on campus.

All of this looks like progress on the surface, right? School district officials stated out loud that After School Satan has just as much of a right to public school space as Good News. Good News supporters agreed. Yay.

But just because fundamentalist Christian families aren’t protesting loudly and publicly, don’t kid yourself that we have all moved on.

In fact, I would bet money that fundamentalist churches throughout the Quad Cities are more focused, from the pulpit and prayer groups, on After School Satan than ever now. I’d bet that prayers to God on Sunday, and at the family dinner table, and when tucking in the kids, are asking a little more  fervently for protection against the sneaky forces of Satan.

I’m willing to bet that money, because I was raised in a fundamentalist environment and grew up attending fundamentalist churches. I went through a short period of my childhood when I was obsessed with a fear of Satan, hell, and burning forever.

Those fears were driven by hellfire-preachers, movies that portrayed the Rapture as a worldwide moment of abandonment and suicidal ideation, and pamphlets illustrating the End Times as a wave of blood sweeping up non-believer. These were just some of the proselytizing tools used consistently on me and other developing minds by fundamentalist churches, in between the “good news” of salvation.

The scary movies, pamphlets and pastors left my tiny mind in a constant state of paralysis, in deep thought over existential questions a five- or seven-year-old shouldn’t really be left contemplating.

Questions like, what is the meaning of right and wrong? Why is there less cheating at games among my friends who don’t go to church, than among my church-going friends who have received the “good news”? How exactly will dancing hurt my soul? Do people who grow up in other countries, with other religions, go to hell along with non-believers? What about babies?? Do we actually burn the whole time we are in hell? Do I even know enough yet about sinning to stop myself from doing it so much that I’ll burn???

I would lie awake late at night pondering these questions, slowly driving myself into a tangible fear of hell that consumed me all day long. In the middle of the school day, triggered by an unusually a dark school hallway or a cruel word or taunt from a fellow student, I’d plunge into panicked, desperate depression and sometimes, fits of tears and anxiety attacks that made it hard to breathe.

As a lesbian who at age 5 didn’t yet have words for what I was, my fundamentalist Christian upbringing triggered even deeper, more intimate, questions about my eternal fate.

The love story in so many comics, TV shows and children’s stories that portrayed heart bubbles between the princess and the prince? Two princesses, in my head. Those ‘70s dramadies with all those male heroes solving crimes and swooping in to save the day at the end? A woman, or at least a man with feminine features like long hair, voluptuous lips, a gentle face or soft or slight figure would replace that woolly, muscle-bound cow”boy” in my head.

All the narratives I was seeing in pop culture were different than the way I saw the world. I was left constantly wondering if it was because I was a sinner. And I’ve spent far too many years and far too much energy trying to undo that early childhood damage ever since.

Thank God my school back then did not have a Good News Club. The doses of fundamentalist Christian guilt I received outside of school were bad enough. Had that religious poison also been present in my school environment, I shudder to think of the direction my life might have taken, early on – how the teasing I already experienced as an androgynous youth would have taken on new levels of terror with the reinforcement a Good News Club would have given some of my tormentors.

I could very well have been one of those horrible stories you read about today on social media, the homosexual youth tormented into ending it all. Instead, I remain a “believer” in a “higher power,” “god with a big or little g,” or “The Universe,” and still use mostly Christian conventions to express that connection – but not through the politicized, socially stratified and often misguided form of the modern-day organized church.

Through intense personal experience, I know that when it comes to homosexuality, fundamentalist Christianity is not much different than conversion therapy, a practice condemned as abuse by mental health experts worldwide and banned in many states and countries. In fundamentalist Christianity, the conversion is from grounded thinker to unquestioning believer; the goal of condemning and altering one’s sexual orientation or gender identity is disguised beneath the “good news” of earning after-life salvation.

This is why the After School Satan Clubs are important. They are an essential chip against a stranglehold that fundamentalism has on our schools today, the same extremism that is now seeping into curriculum questions and crusades to ban school library books.

All across America, we have vocal parent groups or actual School Boards attempting to shut down conversations based on what they believe is good for kids. Whether it’s censoring books, or passing “Don’t Say Gay” bills, or attacking so-called “critical race theory, parents are pushing to limit what kids can hear and talk about at school, for fear of how it might damage their kids forever.

And yet, the trauma of religious extremism is only now getting the scrutiny it needs – partly through the efforts of the After School Satan Clubs, which also earned nationwide headlines back in 2015, 2016 and 2017 after experimenting with clubs in Utah and Washington State. the west. Would we even know much about the Good News Clubs, were it not for the ongoing work of The Satanic Temple and their After School Satan Clubs?

Probably not: CFE won’t reveal in which communities these clubs are meeting. It only boasts of more than 109,000 such clubs worldwide; some estimate at least 6,300 of those are functioning in America today. CFE boasts of more than 25 million “children reached” and more than 429,000 “teachers trained.”

It’s also created 5-Day Clubs, which mentor teenagers to convert young children to Christianity. It also connects with local churches to staff or sponsor these clubs, then ask congregations of scores, hundreds or even thousands to pray for their support at their kitchen tables, or before they go to sleep at night, or when they wake up in the morning.

They’ve got the whole pipeline covered.

The Satanic Temple, meanwhile, has only these two After School Satan Clubs in Moline and Lebanon, Oh., says spokesperson June Everett, with three more pending in Ohio, California and Pennsylvania. “We only start clubs after a request from a local resident or community member,” she said “We do not go in to schools that we haven’t been invited to.”

Everett was part of an open and responsive media team at the national Satanic Temple that has helped local media tamp down rather than amplify the hysteria surrounding After School Satan Clubs:

When encountered with these facts, opponents to Good News Clubs are left with nothing to oppose. They’re left to publicly agree that After School Satan Clubs have the same rights they have. And that’s enough to tamp out the public controversy.

But it’s not enough to stop the fundamentalist mentality that I know from intense personal experience proliferates even more strongly today.

Stopping the public and social media debate won’t stop the preachers at pulpits warning church-goers that they have to fight After School Satan in their hearts and minds. It won’t help remind them that what should matter to them is their spirituality, not others’. It won’t stop the fundamentalist Christian parent from telling their child that the After School Satan Clubs are just Satan’s way of sneaking in the back door to make them question God. And it won’t stop the LGBTQ+ child in a fundamentalist environment or church feel any better about their existential fate or inherent worth. It won’t stop young minds from shutting off their critical thinking and leaning mindlessly on God with a big G. It won’t stop some children and adults from stewing in stress at night or at school about whether they’re good enough to make it to heaven.

Odd as it is to say, we need things like After School Satan Clubs. We need counters to the fundamentalist extremism that is fueling so much of the strife in our society and schools today, and driving these pushes for censorship. We need these counters whether you believe in God with a big g or little g, or no god at all. But especially, if you’re LGBTQ. 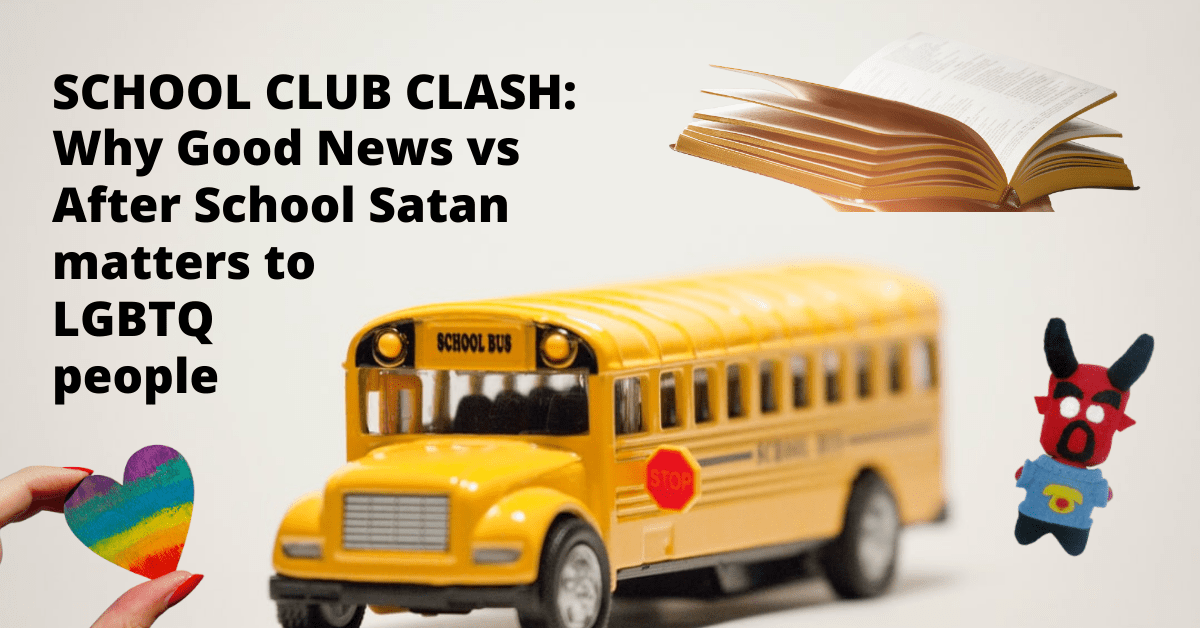