EDITOR’S NOTE: Most people know of Dr. Katie Imborek through her work helping to found the University of Iowa’s LGBTQ Clinic. Imborek is also an active member of Sanctuary Community Church, a non-denominational Coralville church leading the way in LGBTQ inclusion since 2016. Imborek offers occasional teachings at Sanctuary; here is an abridged version of a teaching she provided Oct. 14.

At the start of this school year, my youngest son Will had to complete an “All About Me” collage.

He tediously went through pictures on my wife’s iPhone to find the ones he thought captured his current life as a third-grader. He chose pictures of him eating bacon, his favorite farm cat, his baseball team posing after a tournament win, he and his big brother Parker with their arms around each other, and two family photos with the four of us: Parker, Will, me, and my wife Paula.

That evening while sharing about our days over dinner, Will said to the three of us, “I presented my  ‘All About Me’ collage, and no one made fun of me for having two moms.”  My heart hurt because this was even something my sweet 9-year-old was worried about. But I also felt hopeful because we have prepared our boys for these moments since before they could talk.

We’ve read them picture books about a girl named Heather and her two mommies, a penguin named Tango and his two daddies. We had the “where did I come from” talk as soon as we thought the boys could comprehend the concept of a sperm donor. We’ve taken the time to talk about why “mommy” and “mama” have so many wedding pictures: because one was a commitment ceremony and one was an actual legal wedding.

We celebrated the Supreme Court decision guaranteeing marriage equality throughout the nation, and we’ve talked about how some of our friends still can’t take their partners with them to family events because they aren’t supportive of them being gay.  We’ve asked them to remember, “This is your story.  You have two moms.  Be brave, be proud, and never ever be ashamed.”

Many people don’t have this kind of upbringing — especially people who have been involved in the Christian church. Many have left the church because of anti-LGBTQ teachings, policies, and conduct codes in their church experiences.

Being repeatedly exposed to this rhetoric leads to feelings of unworthiness, guilt, and shame.  Being told that the Bible is clear on homosexuality and that same-sex relationships are by nature perverse and unholy, leads many to lives of lies, half-truths, apologies, inauthenticity, and running — from themselves, their families, their churches, and Christianity in general.

I’m writing this column to offer some help in healing from that damage — and to help more families with LGBTQ members experience the affirmation my son Will describes above.

Consider for a moment the Biblical parable of the prodigal son, from Luke 15. If you’re familiar with this parable, you may have been taught that it’s about how people who sin and fall away from God can still be redeemed if they turn back.  This parable has been used historically by ex-gay ministries, and is still used today by pastors touting the power of prayer and faith in Jesus as a means to turn away from a lifestyle of a gender or sexual minority.

But consider a different interpretation. Consider that the older brother that never left is instead an older daughter who lives obediently with her parents. The prodigal son is instead a younger daughter coming to grips with the fact that she’s a lesbian. While doing so, she becomes depressed, filled with self-hatred, and plagued by panic attacks and paranoia. She barely graduates high school and loses herself for years in alcohol, one-night stands, and lots of Netflix.

Imagine this younger daughter one night finds she can no longer hide her secret and is overcome with the need to share her sexuality with her mom. When she does, she’s greeted with a hug and these words:

“You do not apologize for who you are.  You are my daughter.  You’re brave.  You’re perfect.  And I love every part of you.”

Imagine the mother then grabs a bottle of vintage red wine, gathers together her husband and older daughter, and encourages them to celebrate — triggering a puzzled reaction from the older sister. “We opened a bottle of wine for this? My sister, who refuses an education and lives paycheck to paycheck, decides she’s gay and we’re celebrating? I’ve done everything you’ve expected of me, and yet I’ve never had a reception like this.”

Imagine Mom looking at her oldest daughter with kind eyes, saying, ”Oh, sweetheart. I’m so very proud of you.  You’re becoming exactly the person you’ve always known you would be. I couldn’t love you more.  The road for your sister has been much harder, filled with ups and downs. She has struggled.  We celebrate tonight because your sister has been searching for her true identity for years. She has finally found it.”

In this new understanding of the prodigal son parable, these key messages emerge:

• This one is for those of you of the “majority” culture — meaning heterosexual — and especially those of you who adhere to the Christian faith. When you hear “coming out” stories from friends, family, or co-workers who are LGBTQ+, you can choose the path of the older sister, or of the mother.  You can remember these shared stories are gifts, and an invitation to echo God’s welcoming reception.

• For all of us: Authenticity is worthy of celebration rather than apology. All too often, the narrative of LGBTQ+ people includes some kind of apology for how hard the reality of coming out may be for others. All too often, LGBTQ people who are coming out say things like, “This doesn’t change who I am; I’m still the same person.” Or, “This is such a small part of my overall self.” Or, “I’m sorry this makes things awkward for you; I’m sorry that you have to deal with this.” So on and so on.

Consider that the father in the prodigal son parable won’t even accept the long-lost son’s apology. Instead, he adorns him with robes and immediately celebrates. It’s not easy to live your life with authenticity, in a world (or a church) constantly pressuring us to conform to societal expectations.  If we achieve authenticity, or even come close, we should take a hint from God in this parable, and celebrate.

• Don’t merely “tolerate” your identity. Embrace it. LGBTQ+ people have again and again used the tactic of insisting that being a gender or sexual minority isn’t a choice. That it’s out of their control, and not their fault — because who on earth would ever choose to be gay or transgender?  This self-victimization is often used to appeal to straight cisgender people to invoke feelings of shared humanity and in turn, less homophobia or transphobia.

These very phrases came from my mouth when I first came out.  But  I now see them as degrading, dehumanizing, and relying on pity, not empathy.  Without a doubt, if I had the choice, I would choose to be gay.  I realize this perspective is colored by my privilege, for I have never once felt my physical safety was at risk because of my identity. This is something that can’t be said by many of my queer siblings, especially transgender women of color.

This teaching, my work with Sanctuary Community Church, and even a book I am currently writing are all devoted to sharing some good news that many LGBTQ people damaged by past Christian church experiences need to hear: living into the fullness of your self, including and especially your LGBTQ identity, is like coming home to God.

No more running, no more guilt, no more shame.  Only coming out to a God who is waiting for you with open arms and tears in her eyes, ready to celebrate all that you are, all that you have been, and all that you will become.

Blessed are the boys who wear their mama’s high heels and paint their fingernails.  Blessed are the girls who play football and hate wearing dresses.

Blessed are those who have fought for gender neutral bathrooms. And for options other than male or female. And for marriage equality.

Blessed are those who have been lost and have been found. You are children of God, and Jesus loves you. Amen. 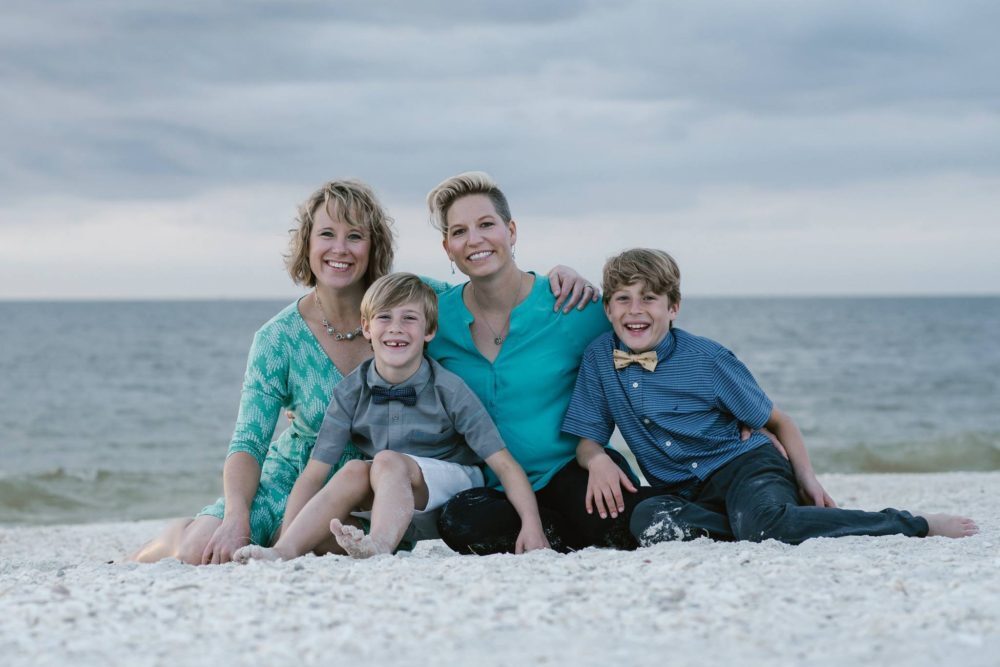