This year’s 50th anniversary of Stonewall, though moving, has also been marred by episodes of entitlement.

These included the shoutdown, at Stonewall Inn itself, of a black transgender woman as she tried to read the names of murdered transgender women amid a party involving mostly white gay men. The episode illuminated that even LGBTQ communities, while themselves marginalized, are still struggling with intersectionality, inclusion, and respect for other marginalized communities.

Isaac Burris, 22, and Adrienne L. Woodard, 59, were among the headline performers at Iowa City Pride recently. They also grew up in Iowa — Woodard in Iowa City, and Burris in Benton County. Their unique perspectives on what it’s like to be a person of color, and an LGBTQ person, are eye-opening, painful, and in the end uplifting. These interviews have been edited for brevity and clarity.

How would you describe what it was like growing up LGBTQ and as a person of color in Iowa?

ADRIENNE: Lonely. Depression at times. It was a time of discovery, trying to figure out who I am, I sort of feel like in Iowa I was invisible. You know, I had a real strong family. My dad was very educated, my brothers and sisters all were raised here, we all have college degrees, and we’re professional people. But then that sort of puts you in this “other” category. You’re not white enough for your white folks, and you’re sometimes not black enough for the black community. The beauty of that is, you can shape it and change it and mold it and begin to stand up for yourself. That’s what it’s really all about, addressing the power inside of you to make things happen.

ISAAC: Being raised in a diverse home with a white father and a black mother, I got the best of both worlds. I used that as a tool growing up. I was also raised in a very “Christian” environment. But it was fake; it wasn’t genuine. It was “if you’re not this, you’re not going to be accepted.” It was also a completely white area. Going to high school was that same trend, but I realized I really needed to step into my true self, my blackness and my gayness. That made people very uncomfortable. Being a black gay man in a white community, it’s a black thing: “We’re a little uncomfortable.” Being in the black community, it’s a gay thing: “If I’m associated with your gay self … I have to be hyper-masculine and almost violent toward you.” For instance, I could not wear what I am wearing right now in black neighborhoods. I would become a hashtag. I feel my calling is to be able to be someone in the public eye. With the platform that I have now and being able to use that like I can, I feel like a beacon of light for people who still find themselves in the dark.

What observations do you have about intersectionality among the LGBTQ communities you’ve experienced?

ISAAC: Believe it or not, there are so many mostly gay men in the community that disenfranchise and discredit the validity of trans people. A lot of these men are Caucasian. They find they forget that they still have that privilege, that entitlement. They have that “because I’m gay, I’m part of it” mentality.

ADRIENNE: I’ve been shunned a lot in this town. I was totally shunned at a Pride event (in the past). This was several years ago. It was a very uncomfortable situation. Nobody would talk to me. People were whispering about me. I finally met the love of my life and feel vindicated. I feel very blessed. But for a long time, I didn’t feel like I had any friends that were lesbian, gay, or transgender.

ISAAC: I’ve always been raised in a Christian home, and I love it. It’s kept me alive. There was a time in eighth grade when I was coming to terms with my sexuality, and I hated it. I thought I’d be going to hell. So here I am, hanging up a rope. Well, God broke that rope. He said, “You’re not doing this. I have too many things for you to do.” And I said, “OK.” Not to downplay anyone else’s take on faith … but I really view my faith as a very genuine thing. Because it’s not about me trying to get everyone else to do what I do. It’s just me, and who I talk to at night. At the forefront of what works for me is love. I always tell people, “At the end of the day, I’m loved and honestly you are too. And you walk away.”

ADRIENNE: I was for at least a couple of years immersed. We moved to Kansas City as children, and every Sunday in Kansas City, you go to church. Everybody goes to church. You’re in church from 10 in the morning until late at night. It’s all about the church meals, and the music, and the people. Then we moved to Iowa, and oh my god. What a culture shock. Where the heck is the black church, the praise waves? The wave path coming off somebody in the front row. None of that was here. For a while my mom had wanted us to go to church every Sunday. After a while, she said you can do whatever you want. From there, I began to explore different philosophies to find the one that works for me. Now, I believe in God but I’m more interested in spirituality, and that is living day to day with love. 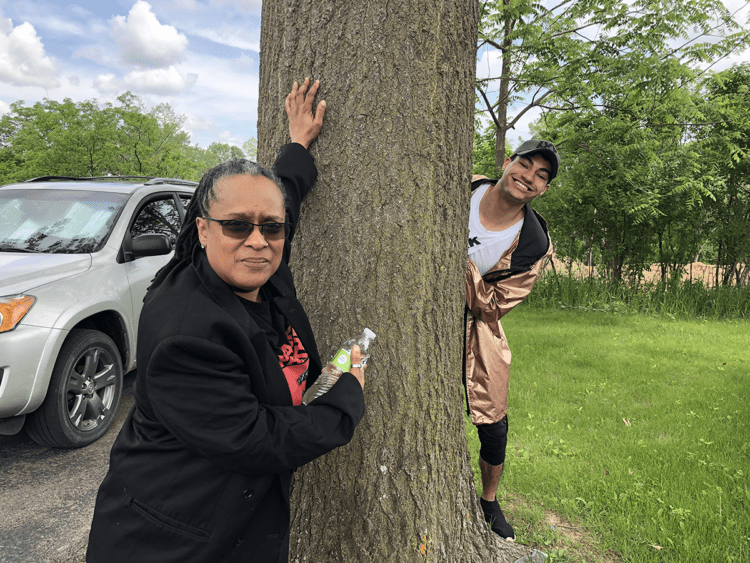