The ombre of fall leaves make downtown Orange City look gorgeous.  But those two pride flags changed the atmosphere even more, creating a swarm of feelings, followed by a shiver of awe.

Orange City isn’t a town where you see a lot of rainbows … well, not OUR kind of rainbows, anyway. So when your group’s banner is a rainbow, it’s impossible to hide. Six of us had worked for over a year to get the details right for 2018.  It was on, and we were ready.

Sioux County and Orange City — also known as the heart of “Steve King country” — is one of the reddest counties in Iowa. Its culture is a very homogenous collection of reformed and protestant Christians. When the Des Moines Gay Men’s Choir sang here, they were sharing their art with an unreached community.

Our town is also known for its hospitality, and kindness.  So, when we are asked “why start a pride in Sioux County?” the answer is easy, “Because it’s our home, and it’s a really nice place!”

When I attended Northwestern College, the Christian college in town, I’d talk to queer folk that attended school or lived in town before me. I heard so many stories of the college and town failing its LGBTQ+ youth and adults.  But even in the worst moments, those people reminded me that kind people were there for them.

My own life was similar to theirs: not an ideal situation, but at least I had a support network.

By contrast, many other queer folk leave here to seek greener pastures for their lives. The Queer diaspora out of Sioux County includes some of the most gifted people I know: artists, community leaders, musicians, chocolatiers, clergy, legal professionals, the list goes on and on.

OC Pride and the visibility it brings allow networking that otherwise would not be happening. In 2017, our first year, we met so many local LGBTQ folk we didn’t know existed!

They included a man in his 60s enjoying his first-ever Pride experience. At the same Pride dance where we met him, we saw parents beaming as they watched their non-binary children smile in a way they hadn’t in a long time.

OC Pride is now positioned to help provide outreach to small towns in our area.  We hope more of them will join us in embracing their own queer communities. You don’t have to be a major metropolitan area to celebrate LGBTQ family.

While 2017 taught us that Pride can exist anywhere, 2018 was when we took a seat at the community table. This attracted some detractors: our local library procured books that showed LGBTQ representation across a spectrum of ages, and one man checked them out to burn them in protest.

Controversies like this can bring a lot of attention to an event. And while attention can help fundraising, it also can be draining. Speaking to love and pride when others want to paint you as evil isn’t always an easy playing field. Staying grounded in the mission of pride is important.

Being the minority in a community isn’t easy either. It’s important to take an intersectional view of your own community, and see how you can help others that may not have the freedoms you do.

The founders of OC Pride are fortunate enough to work for employers who celebrate various gender identities and orientations. We also have friends that cannot stand as vocally, because bigotry can affect their employers negatively.

That’s why we never measure OC Pride by how large it is, but rather by how much love we show to our community.  We’d love for you to join us next October, and experience OC Pride for yourself!

Michael Goll is a co-founder of OC Pride, which will celebrate its third year in October 2019. 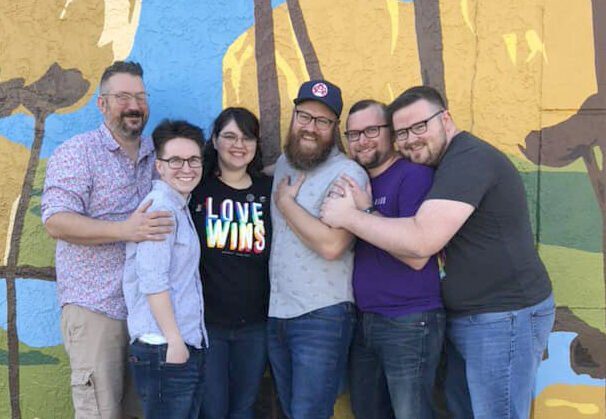