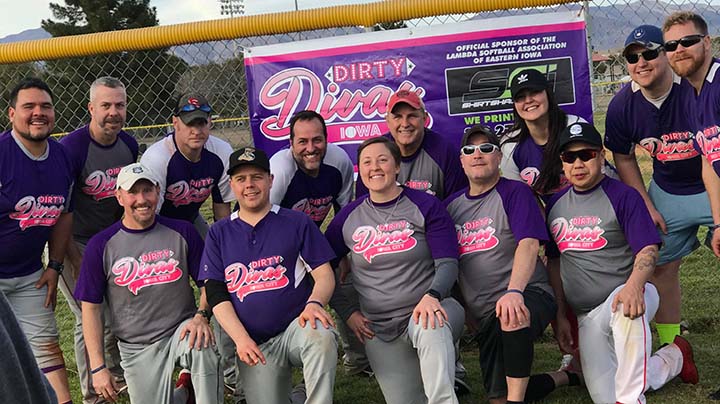 Two LGBTQ-identified sports leagues are increasing their presence in central and eastern Iowa, each in their own ways.

In central Iowa, the Pride Sports League is seeking to grow this year beyond its outreach of about 900 recreational players in about a half-dozen sports annually, says board chair Tyler Pettit. The League is seeking to reach more deeply into Ames and the Cedar Valley area.

The Iowa City-based Lambda Softball Association (LSA) aims to expand into eastern Iowa communities such as Fairfield, Washington, Cedar Rapids and the Quad Cities for its more competitive-style league. The league seeks to build beyond its current four to six  teams and also offers other sports on a smaller scale.

Both leagues welcome all genders, and allies, and provide an additional social, recreational and self-esteem-building pportunity for their LGBTQ+ communities.

“We started as a group that wanted to do activities not necessarily revolving around drinking and the party scene,” Pettit said. “We were trying to find out what we could do as a social network, especially for people new to Des Moines. Including those who have families.”

“Gay softball has helped many in the community (including myself) to build self-confidence, self-esteem, and develop a sense of belonging,” says Jose Maldonado, who founded the LSA. “Anyone who has the ability to swing a bat and run around the bases can develop the skills to play ball.”

The Pride Sports League kicked off in 2012, with kickball, Pettit said. Then came darts and pool, often played at the local LGBTQ bars.

Next, the League added softball, volleyball, sand volleyball, basketball, and dodgeball. By 2015, the league had about 500 participants. It’s now up to 900, and is reaching deeper into Ames and the Cedar Valley area.

Pettit says the community has grown accustomed to expecting a Pride Sports League event every single Sunday, year-round, with most events having a $5 fee that funds the league’s entire operation. You can register for all league activities at pridesportsleague.org. This year, a big goal is to offer more free events, where all costs would be covered by the league.

The LSA  started in 2018 with softball, and a process of assessing and ranking players for placement, with an eye toward balancing out teams and also assembling traveling tournament teams. It also recruits local businesses to sponsor the softball teams that compete in a spring and fall league.

The league has since added kickball, volleyball and darts, providing them for free or for a small requested donation. Originally featuring mostly Johnson County players with a few making the drive from Des Moines, the league aims this year to attract players from Cedar Rapids, Marion, Mount Vernon, Fairfield, the Quad Cities, and more.

The LSA is planning to put up is new website soon, and lsaiowa.org. Meanwhile, its traveling tournament team (Dirty Divas) is taking major steps forward. The team just returned from a trip to the “Sin City Classic” in Las Vegas, considered one of the largest gay sporting events in the world, where it finished 5th out of 28 teams. The Divas have also participated in tournaments in Madison, Minneapolis, Milwaukee, Kansas City, and Fort Lauderdale.

Pettit is excited about the new “PSL gym classes,” which he says are “chances to learn a sport a few months before league play begins.

“I always tell individuals, if you’re interested in the Pride Sports League, take that first year and try everything,” he says. “Dodgeball can be nerve-wracking, you don’t know what to expect, (but) you might surprise yourself. I was not much into sports at all and was very nervous at first and then I discovered I can actually play and do these things. That’s a success story we see a lot of.”

Quotes from some LSA players:

“I’ve met some amazing people and built some of my closest friendships from this league.” — Rachel Daily

“As a former Div I softball player, you finish your career and there is a void. There is no easy way to fill that void, but you try. It took me days, weeks, years, and then one Saturday night in Iowa a friend said “hey, do you want to come play softball tomorrow morning?” I immediately said yes.” — Melissa Stockwell-Gregson

“I would love to see the league expand and grow, and would love to get as many people to join as possible. It’s such a fun, positive group to be around.” — Evan Risk