“They’re preparing to intubate him.  They’re setting up.  It’s happening in the next 15 minutes.”

My husband had just gotten off the phone with his father Mariano (a lot of people call him Randy), who had been admitted to the hospital just the day before with COVID-19.

His wife Leighton had dropped Mariano off at the front door of the emergency room that morning. “Go ahead, I’ll park the car and catch up,” she remembers saying.

That’s not how it went, of course. Leighton ended up going home to begin her two weeks of quarantine. Mariano, a pretty healthy 68-year-old who exercised regularly pre-COVID despite having asthma and high blood pressure, went on to be intubated for 15 days, and hospitalized for 30.

He’d caught the virus from a co-worker who was asymptomatic, whose husband had the virus.

To save the suspense: Mariano lives.  This is not his obituary.

It is, however, a sometimes terrifying tale. And like a lot of people, Mariano is still fighting the effects of coronavirus more than nine weeks after being released from the hospital.

“I have no memory from April 5 to May 3,” Mariano says. This includes the day before he went to the hospital almost to the day of his discharge. Mariano doesn’t remember exchanging greetings with his son (my husband) that day on the phone.  He doesn’t remember hearing the voices of his family who called when his condition was stabilizing.

Mariano benefited from therapies that, at that time, had just begun making a positive difference in coronavirus patients. He was turned from his back to chest every 12 hours while intubated (now called proning). This process takes a minimum of five trained staff at the bedside to manage all the tubes and IV lines.

He also received convalescent plasma, benefitting from a Mayo Clinic program where fully half of donations came from the Hasidic and Orthodox Jewish communities of New York. The process transfers coronavirus antibodies from a recovered person to one in the throes of infection, helping to boost their ability to fight the virus.

This had led to a turning point. Two days after receiving the convalescent plasma, Mariano’s oxygen requirements from the ventilator began to decrease.  When he was eventually extubated, he had overcome 5 to 1 odds against him making it that far.

Mariano’s first memories after being admitted to the hospital are of people standing over him wearing face masks that often were decorated with bizarre, abstract images. Those people were doctors, nurses, and technicians, but Mariano didn’t even know he was in a hospital at first. It was all very unsettling.

The people standing over him would ask questions: “What is your name?” “Mariano.”  “What is your birthday?” “Why?” “Who is the president?” “That jerk I didn’t vote for.”

He remembers discovering the IV line in his arm, and the feeding tube down his throat.  He remembers an early hint of familiarity: a speech therapist testing his ability to swallow said, “Mr. Arcenas, you were my soccer coach in middle school.”

“He would go in and out of knowing who people were,” Leighton remembers.  “Once when I called, he said, ‘I’m so sorry everybody got shot.’ I think somebody had left a TV on in his room.”

Once discharged, Mariano went directly to inpatient rehab. He stayed there an additional two weeks to regain the strength to feed himself, play the guitar, and walk a few blocks.

Leighton and I are both doctors, so we had spent hours researching — her talking to specialists and reading The New York Times, and me on the internet reading the early peer-reviewed studies from China, South Korea, and New York.

We were looking for every bit of hope, to help us overlook things like how at one point, his chances of dying were 70 percent. We focused on the unbelievable and can now say, with gratitude, that people are surviving this.  People can have oxygen levels at 50 percent for weeks on end (“normal range” is 95 to 100), and still pull through.

It’s not over yet. Mariano says his stamina is only 25 to 35 percent of what it was, and he worries about whether he can return to work.  His current routine is calisthenics, walking, cycling, and in between each, a nap.  He wants to regain 75 percent of his previous strength so he can work a seven-hour shift.

Mariano never reached the point where he had two negative tests in a row. Right up until discharge, he was still testing positive as often as negative. Doctors speculate that’s because of non-infective, leftover “pieces” of virus, but we honestly don’t know yet.

So Mariano still follows the “six-foot or more” rule of social distancing, and still wears a mask when he’s at a store or brunch. “COVID is only 7 months old,” he says. “I don’t know if I can catch it again, or spread it.”

He and his wife joined the grandkids for the Fourth of July holiday, masks for all. Someone called out Grandma Leighton at one point for moving too close to someone from outside her household.

I wasn’t able to be there, but I called Mariano and chatted about it. He gave me permission to share this story. A story without an ending, and full of ongoing uncertainty. 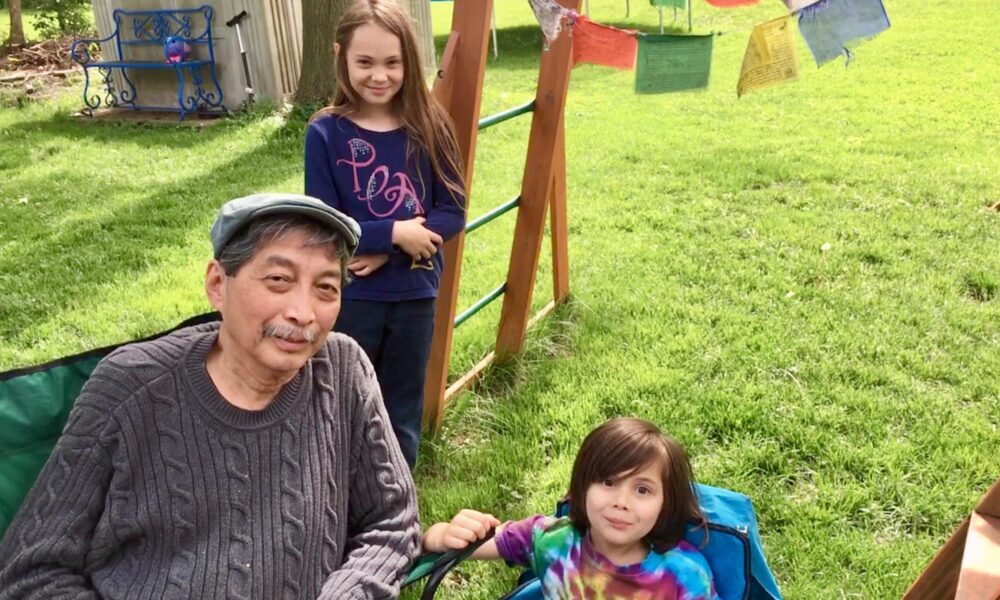