Add yet another Republican-driven, over-reaching, and misinformed piece of legislation to the Iowa Legislature’s list of bad ideas this year: a 40 percent tax on glass pipes, plus several more increased costs and licensures.

Proposed under the guise of slowing the damage of highly addictive methamphetamine, the bill if passed would instead hurt hundreds of small businesses across the state, opponents say. They predict it would drive out the glass art industry altogether, and further marginalize Iowa in the budding cannabis industry as states around Iowa move toward embracing the industry.

They also say it would have little to no effect on stopping the damage of methamphetamine, but by lumping all glass pipes into a meth-using category, would set back anti-racism efforts rooted in decriminalizing or legalizing cannabis, says one anti-racism leader. In Iowa, a Black person is more than seven times more likely to be jailed for a cannabis-related offense than a white person, making drug policy a key part of fighting systemic racism.

“At a time when statewide nearly all Black Lives Matter organizations are asking for marijuana to either be decriminalized or legalized, it is disheartening to see the State Legislature instead focusing on criminalizing and penalizing those who sell glass pipes commonly used to smoke marijuana,” says Sophia Joseph, who is involved with We Are C.R. and the Marion Alliance for Racial Equity. “It sends the wrong message in a state with outrageously high disparities (in marijuana charge rates) between whites and Blacks. It is a regressive instead of a progressive step.”

While statistics show the entire country is struggling with the effects of over-use of methamphetamines, which can cause rapid physical and psychological damage to users, imposing a hefty tax on pipes is likely to have little effect on meth users, wrote a Cedar Rapids commentator.

“Store-bought pipes are just one means of consuming substances,” wrote Adam Sullivan in The Gazette shortly after the Senate’s unanimous passage of the bill in late February. “If someone is committed to taking drugs, lack of a pipe probably will not stop them. Do-it-yourself pipes can easily be fashioned from household items such as cans, foil or even fruit.”

The bill’s sponsor, Dan Dawson of Council Bluffs, has openly admitted during interviews and that the bill was his “innovative” way to essentially “ban” glass and metal pipes, which is constitutionally impermissible.

That’s why Jacob Jensen, owner of Cloud 9 Glass in Davenport, describes the bill as “extortion” and “smoke and mirrors.” He predicted dire and rippling economic consequences across Iowa if the bill were to become law.

Imposing a massive tax on all glass pipes will force the closing of small businesses like his, where glass is 90 percent of his business, Jensen said. Larger corporate smoking accessory shops, where glass pipes are perhaps 10 percent of business, will be almost unaffected. Furthermore, Jensen said, “it will cost more for glass shows to get pieces in. More for the artists to get the materials in that they need. Artists will back out of selling to stores,” he said.

Other states will keep gaining massive tax revenue from not only glass artists, but also growers, distributors, extractors, dispensaries and more in the growing cannabis industry. Iowa, by contrast, presents as hostile toward and confused about the cannabis industry, by advancing a bill that taxes all glass pipes in the name of stopping meth usage.

“I don’t see this law having any impact on methamphetamine usage,” says David Reitz, now a consultant in cannabis extraction in addition to his glasswork, as Glass Impact. “Moreso, I see it having a negative impact on hundreds of businesses across Iowa.”

Reitz and Jensen are among more than 850 people who have so far signed a change.org petition started earlier this week by Kelly Stucker, who has owned The Konnexion in Iowa City for 17 years and a branch in Dubuque for six years.

Stucker, who has contacted 30 glass shops throughout Iowa since learning of the bill last week, says it appears to be written by people who are confused about glass pipes. On the most basic level, she says, the bill refers to devices used for “combustion,” when meth is not actually combusted (burned) when consumed. Instead, it is heated from the outside while within a closed container. While the bill’s sponsor, Dan Dawson of Council Bluffs, appears to understand this in interviews, his legislation nevertheless refers specifically to pipes used for “combustion” of “tobacco, hemp or other plant materials.” In reality, meth/crack pipes are designed differently than tobacco/plant material pipes, and the two cannot be interchanged with each other.

The bill also doesn’t distinguish between “the cheap, disposable pieces of glass” that cost $10 or under, and “works of art” that can cost up to $100,000 and have been officially labeled pieces of art by the Iowa Supreme Court in 2014, Stucker said. Reitz, for example, says the pieces he creates as Glass Impact are not even intended to be used, but rather only viewed.

In terms of nationwide policy, research and impact, the two substances — cannabis and methamphetamine — could not be more different. Cannabis in the form of marijuana is increasingly recognized through research for tangible medical and psychological benefits, while the dangers and risks of methamphetamine use are increasingly documented.

Overdoses and deaths from meth use are increasing nationwide, along with usage. In Iowa, it’s especially bad: the state hit an all-time high for overdoses and people in treatment in 2019. Though once administered to soldiers for alertness, and prescribed to children for Attention Deficit Disorder in the form of Adderall, as a street drug it can have devastating physical and psychological consequences, says the Rockefeller Institute. It can cause heart and kidney problems, lead to vitamin deficiency because of suppressing appetite, and lower inhibitions and increase energy, a combination that leads more often to risky sexual behavior and violence than other drugs. It can increase the heart rate, create an irregular heart rate, trigger high blood pressure, and create anxiety, paranoia or even psychosis, and make it difficult to feel satisfaction in anything other than the drug.

Stucker says she has always refused to carry “flute” pipes and turns away customers asking for them. And while she supports reasonable efforts to stop the damage of meth use and won’t accommodate it, she says there’s a more effective way to do that than trying to tax glass pipes out of Iowa.

One first step, she suggests, is to rewrite the proposed legislation to distinguish between “functional glass art” and “flute” pipes, “bubble” pipes, or contraptions that can be used to vaporize meth. Another would be to focus more on what Iowans need.

You can find the petition against the 40 percent glass pipe tax here. Other provisions in the proposed bill would impose a second license on shops that carry glass pipes, and ban shops from displaying glass art to anyone under the age of 21.

The bill was already unanimously approved by the Senate in mid-February, but has been reclassified to go through the Ways and Means Committee, where it was once again advanced March 4.

This is one of many bills the Legislature is considering this year that have come under fire for their extremist conservative nature. Others include a rash of proposed bills that would have targeted LGBTQ people; bills that would prevent or interfere with cultural sensitivity training; and bills that would restrict the ability to vote. 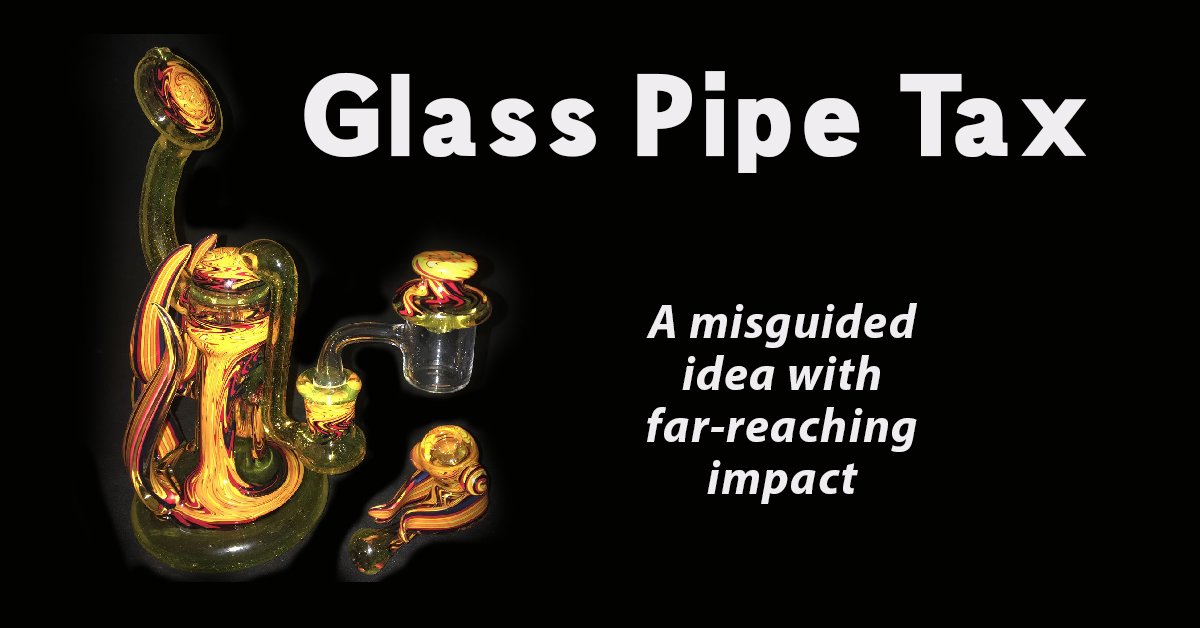