QUAD CITIES — An expert on the rise of hate groups that is also one of the nation’s most sought-after speakers comes virtually Wednesday to the Quad Cities, which has faced a rash of hate-related incidents over the past year including the graffiti-spraying of a Jewish temple just last week.

Dr. Kathleen Belew takes to Zoom Wednesday evening to provide a webinar titled “What Is the White Power Movement? Why Should You Care?”

Author of a highly-lauded 2018 book on white power, Belew is now one of the nation’s top speakers on fighting the white power movement. She was featured earlier this month this by The Economist and NPR; last month in the Washington Post, the Chicago Tribune and Wired Magazine; and in recent months by Esquire Magazine, MSNBC, The New York Times, and PBS.

Overall, she has logged more than 75 media appearances, many of them occurring since October, when Belew spoke out strongly over the attempted kidnapping of Michigan Gov. Gretchen Wittmer, warning that more violence was to be expected. As violence now continues in the wake of Trump’s Nov. 3 election loss, Belew’s research and warnings are even more in demand.

She is bringing her message to the Quad Cities courtesy of One Human Family of the Quad Cities Area, which has been working to increase awareness of hate incidents for at least three years. The Quad Cities is recovering right now from a recent hate incident: last Tuesday, Temple Emmanuel in Bettendorf shared pictures of anti-Jewish hate speech that had been graffitied on its building.

Belew’s appearance will help the community mobilize against that incident, and many other hate incidents that have plagued the Quad Cities in the past four years, say webinar organizers.

“Her presentation and question-answer session at the end of the program will allow all who take part to understand the genesis of this movement and learn how we can join forces to overcome it,” Rabbi Henry Karp, co-founder of One Human Family, told KWQC.

“I’m so disappointed in the threat,” said Rich Hendricks, also co-founder of One Human Family, and paster of Iowa’s only LGBTQ-identified Metropolitan Community Church in Davenport, in an interview with Illinois’ Blue Mountain Eagle. “But I’m glad the temple decided to speak about it and show the world this happens. Once again, this is a wake-up call. The majority of people would never do or think something like this. So the majority must speak out against it.”

The Quad Cities and other Iowa communities have been targeted for years by distribution of hate fliers by a group called the National Alliance. Among One Human Family’s main messages: hate incidents and hateful “free speech” protected by the First Amendment can damage a community just as much as prosecutable hate “crimes.”

Among Belew’s key message in interviews is that acts of racial hate are rarely committed by so-called “lone wolves” but are usually loosely connected through online communication. The white power movement has adopted “cell-style terror,” where different groups take related actions without coordination, she said in an interview with the Chicago Tribune. “That strategy was designed to evade court prosecution, but it has the much bigger consequence of evading public understanding,” she said.

Also, followers of the white power movement are “ideologically diverse” and can range from Klan members to tax protesters, she told the Tribune.

The event is co-sponsored by the Davenport-Bettendorf American Association of University Women, the Metrocom NAACP of Davenport, Metropolitan Community Church of the Quad Cities, One Human Family Macomb, Progressive Action for the Common Good, Quad Cities Interfaith, Temple Beth El of Dubuque and Temple Emanuel of Davenport.

Iowa and Illinois each have different documented histories of hate speech and white supremacy. The FBI identifies only three hate groups in Iowa but 32 in Illinois. Illinois is also one of few states where hate crimes grew substantially in 2018 despite a nationwide drop during that year, reports ABC7-Chicago. And, Illinois is home to Kyle Rittenhouse, the 18-year-old gunman who killed two Black Lives Matter protesters in August just over the Illinois/Wisconsin line. Hate incidents are regularly reported and prosecuted in Illinois, and broader incidents also take place, like when entire school districts outside of Chicago were hit with racist hacking, reported U.S. News.

But in Iowa, the struggle is getting law enforcement to actually document hate crimes, reports the Des Moines Register. The paper reported in 2017 that more than half of Iowa’s law enforcement agencies had failed to report hate crime data.

Among the key incidents in Iowa in recent years:

• In October 2016, hate fliers appeared simultaneously on the campuses of Iowa State University in Ames and the University of Iowa in Iowa City.

• In August 2017, similar fliers appeared in the Quad Cities. At the same time, National Alliance member James Matthias was discovered placing the fliers on cars in a school parking lot, and was charged with carrying a gun on school property. Matthias is thought to be behind most of the racist flier distribution in the Quad Cities.

• In September and October 2019, hate fliers are wrapped around The Real MainStream and thrown into select couples’ yards.

• In January 2020, several communities in the Quad Cities are again hit with hate fliers.

• Also in June, a Marion woman’s home was spray-painted with a racial epithet.

• In November, white supremacist stickers were posted in Dubuque.

• Last week, Temple Emmanuel was tagged with graffiti citing a Bible verse considered to be a slight against Jewish people, likening them to children of the devil.

Wednesday’s webinar is 7 to 8:30 p.m. Click here to register through Eventbrite. 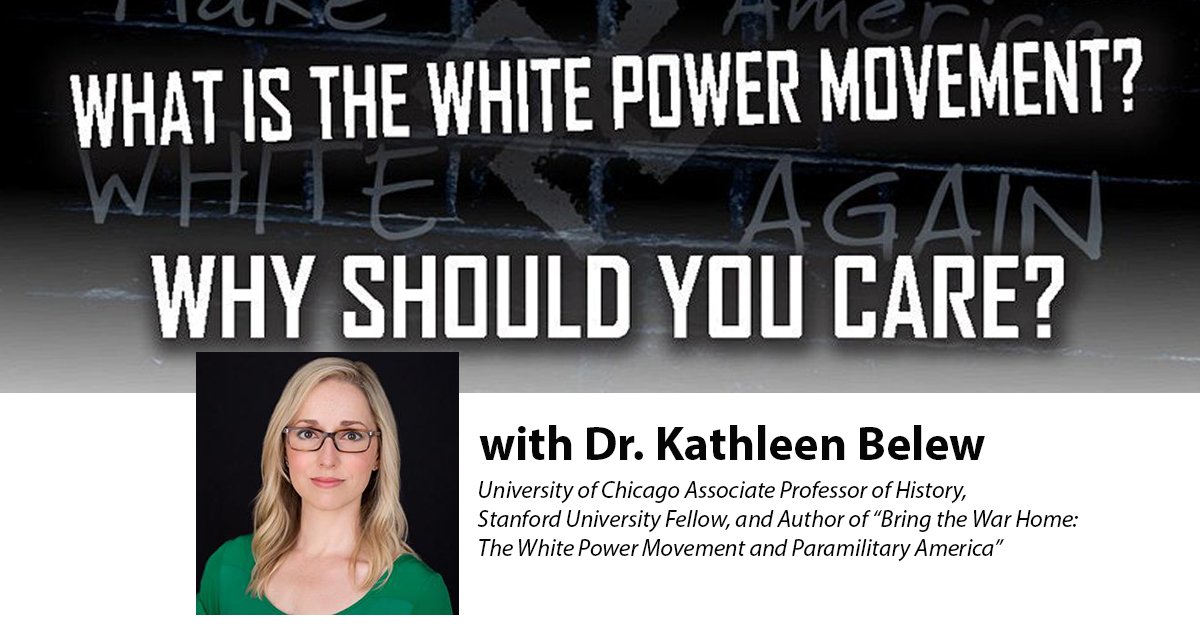