QC Pride is coming back strong after flooding forced its annual Pride celebration to be rescheduled.

A week of fun is scheduled for June 22 to 28, with a parade, family skate day, movie, cruise, bar crawl, and pageant. Led by community organizer Michelle Royal, the group helping to revive this year’s Pride celebrations hopes to pull out an even bigger crowd th

“We could have pulled the plug and said see you next year,” Royal said. “But we have sponsors in place. The water’s supposed to be below flood stage by next weekend, and people are going to be looking for things to do.”

Royal said recent happenings at the federal level, most notably oppressive policies against transgender people, make it important to ensure this year’s QC Pride happens in spite of the flooding that has plagued eastern Iowa for most of this spring.

“Look, two years of being suppressed and erased from any protections that this United States government granted us prior has been real hard on the LGBTQ community,” said Royal, owner of Hickey Brothers smoke and vape shop.

• Saturday: the Radisson and QC Unity Pride join together to host a pre-parade Brunch, starting at 9 a.m. The Unity Pride Parade begins at 11 a.m. and is followed by a Pride after-party until 9 p.m. along 3rd Avenue, featuring music and food.

• Sunday: A dinner cruise in honor of the late Tim Groover, former member of QC Unity Pride, departs at 4:30 p.m. and continues until 7 p.m. The evening includes a full-course Captain’s Dinner followed by dancing and mingling.

• Monday: the Putnam Museum presents a showing of “Stonewall” starting at 6 p.m.

• Friday: Join in the celebration of the e in the Unity Pride Pageant, starting at 8 p.m.

This is the second year QC Pride has revived itself to hold Pride celebrations in the summer. The group formed back in the early 2000s then disbanded for a few years because of member burnout.

Royal said an estimated 1,600 people attended last year’s parade, and she expects about that many this year. The week’s activities also include a Pride Pub Crawl over two nights, with one night each devoted to each state. For a full list of events, go to www. qcunitypride.org 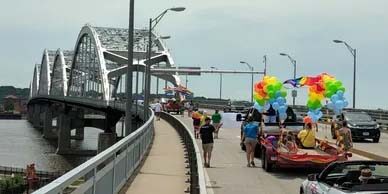