At least 19 communities throughout Iowa and Illinois are stepping forth with protests, vigils, rallies or marches in solidarity with Jacob Blake, the Kenosha, Wis., man paralyzed by at least seven police bullets to his back.

The gatherings are from Des Moines to Chicago, along the Wisconsin/Illinois line, the Iowa/Illinois line, and the Missouri/Illinois line. Communities hosting events range from larger cities like Chicago and St. Louis, to tiny West Branch, Ia., and Effingham, Ill.

Most of the rallies, protests and vigils are hosted by racial justice groups that formed or expanded in early June after the video-ed crushing by police of Minneapolis resident George Floyd.

The events cover many different purposes. Some, like the March on City Council in Des Moines, will focus on local government and demands from June that remain unmet. Others, like the Black Lives Matter Vigil in Elmhurst, Ill., will be more somber and honor those lost to police brutality or systemic racism.

Still others, like Eric Puryear’s Peaceful Protest Against Police Brutality and Racism in Bettendorf Sept. 5, are part of ongoing campaigns to fight police brutality and systemic racism.

Unlike the protests that happened in early June, these protests are happening under new circumstances that make them more of a risk to participants, and more of a statement. These factors include:

• the increased, more visible reaction of armed, mostly white “militia” members, many of which affiliate with groups or stances that oppose the Black Lives Matter (BLM) movement for racial justice. Two Kenosha protesters died earlier this week after being shot by a 17-year-old member of one militia. In Iowa City, a man who ran through a crowd of protesters has been charged with intimidation with a deadly weapon.

• the intense politicization of protests through the Republican National Convention this past week. Speakers have referred both directly and indirectly to violence and attempted to blame protesters for violence and community destruction. The convention featured a white couple that threatened protesters with guns in St. Louis, Mo., as guest speakers.

• the public support of sports organizations in solidarity with the Blake family. As of Thursday evening, boycotts had been declared by the NBA, the WNBA, Major League Baseball and Major League Soccer, along with several sports personalities.

A list of 19 racial justice events throughout Illinois and Iowa are listed below. But first, here is an important section largely intended for non-Black readers:

II you decide to attend a Black Lives Matter protest, a protest against police brutality, or a vigil to honor victims, the American Friends Service Committee (AFSC) offers some tips for how to ensure your support is authentic and supportive of the organizers, rather than driven by “performative solidarity,” white guilt or any other syndromes that sometimes manifest as inappropriate actions by well-meaning non-Black people:

• “Consider that your role might be as a witness and support to others’ expressions rather than expressing your own feelings,” writes the AFSC.

• Avoid provoking police, because the Black protesters around you will likely suffer worse than you, should police react to provocation.

• Don’t ask or expect Black protesters to “tone down.”

• Share on social media judiciously, AFSC recommends. This means only “one selfie allowed,” and posts of others’ faces only with their permission.

• Black people lead the chants. Not you.

• If a member of the media asks you for comment, steer them to the event’s spokespeople. Don’t just start talking.

• Be ready to take care of yourself; don’t leave it to protest organizers. This means do your homework ahead of time, bring what you’ll need to the protest, and have a back-up plan ready for yourself that doesn’t put more pressure on organizers.

Formed in 1917, the AFSC is a Quaker organization, which means it believes that “there is something of God in everybody and that each human being is of unique worth. This is why Quakers value all people equally, and oppose anything that may harm or threaten them. Quakers seek religious truth in inner experience, and place great reliance on conscience as the basis of morality,” reports the BBC.

“Lasting peace with justice, as a practical expression of faith in action” is the mission of the AFSC, which also aims to “nurture the seeds of change and respect for human life that transform social relations and systems.”

Organizers of all events also ask participants to wear masks and practice social distancing and hand-washing throughout the event.

Here’s a chronological rundown of Black Lives Matter events, police brutality protests, Blake family vigils, rallies or other events in support of racial justice in Iowa and Illinois, starting Fri., Aug. 28 and continuing through the end of September:

• The Jacob Blake Protest, Clinton, Ia., starts at 5 p.m. and features both a march, and a gathering at Clinton Park. “Jacob Blake was shot in Wisconsin. George Floyd was shot in Minnesota, and while Black Folks already known this, many white folks look at racism and its systemic issues as ‘big city problems,’ ” organizers wrote. “They associate it with Chicago, New York, LA, and miss the systemic racism in their back yard. After the trauma the Blake family is going through and this continued violence, we have organized a protest in support for Jacob.”

• Continue for Justice for Decynthia C, Jacob B, Trayford P. in Elgin, Ill., starts at 6 p.m. at the Elgin Police Department. “We want an anti-racist city administration, we want police accountability,” organizers wrote. “We want the most appropriate implementation of the programs that will bring about equity for all of us, we want the unhoused to stop being criminalized, we want for the police to stop normalizing guns amongst youth, we want the city of Elgin to get our priorities right and fund social services before continuing to fund excessive policing in our neighborhoods and schools. Let’s learn from these already excessive tragic examples and advocate for change for a healthier City of Elgin.”

• The IFR Protest in Iowa City, Ia., will happen for the next four days at the Pentacrest and starts at 7 p.m. It’s hosted by the Iowa Freedom Riders.

• March on City Council in Des Moines, Ia, starts at 5 p.m. and is organized by Black Lives Matter Des Moines. “Out of your house and into the streets! We’re back at it again so be on the look out for the location drop this Saturday,” organizers wrote.

• No Hate in Our States in Moline, Ill., takes place at 11:30 a.m. every Saturday through Sept. 12. Hosted by the Progressive Action for the Common Good, these 35-minute gatherings are intended “to keep racial justice, in particular Black Lives Matter, in the forefront of the public’s collective conscience. Bring your own signs or hold one of ours.”

• Rockford March Against Police Brutality in Solidarity with Kenosha in Rockford, Ill., starts at 3 p.m. at Saturn Park. “Not only will we march in advocacy of (Jacob Blake) but also to continue to highlight the injustices of the Rockford Police Department and the Winnebago County Sheriff’s Department who have continued to assault protesters in Rockford.”

• A Peaceful Gathering Against Police Brutality, in Effingham, Ill., starts at noon, featuring a walk through town in solidarity with Jacob Blake. “You’re welcome to make a sign and join me if you want to. Peaceful people invited. Shit disturbers will be shut down. This is a peaceful event aimed at drawing community attention to an issue we’d like to see addressed.”

• BLM March in Waterloo, Ia. takes place at 10:50 a.m. at Hawkeye Community College, considered one of the most diverse colleges in the state.

• The Racial Justice Gathering in West Branch, Ia., takes places 5:30 p.m. every Tuesday through September at the West Branch Friends Church. “We need to reflect on the realities of the world as we have come to understand it, learn how bias has affected the way we organize ourselves, and act to transform ourselves to become more just, equitable, diverse, and inclusive.”

• Peaceful Protest Against Brutality and Racism in Bettendorf, Ia., is attorney Eric Puryear’s third event objecting to police brutality. Join him in the parking lot of the Bettendorf Police Department at 4 p.m. to “make our voices heard in a peaceful fashion.”

• Black Lives Matter Vigil in Elmhurst, Ill. is a united effort of Elmhurst College pre-Law students, members of the Black Student Union and other clubs to “recognize all the Black Lives we have lost from injustice and also exploring the path to a more just legal system.” Gather for an hour starting at 11:45 a.m.

• The BLM Rally in Decatur, Ill., starts at 5 p.m. at the Decatur Civic Center. The event is sponsored by DSA Illinois.

Many other communities have already held events to stand up anew against police brutality or show support for Jacob Blake and his family. They include:

• Ames, Iowa, which held a March in Solidarity for Jacob Blake Wednesday with the goal of disrupting classes at Iowa State University in order to call attention to the need for systemic changes to end systemic racism. “This is the time organizations like us need you the MOST!” the group wrote.

• Champaign, Ill., which held an event titled End White Silence: Action for Jacob Blake on the campus of the University of Illinois-Champaign/Urbana Wednesday. “All are welcome, but we recognize the unique responsibility of white folks to engage in the struggle against racism and white supremacy,” organizers wrote. “We ask that all white folks make a commitment to take a specific action to end white supremacy, in this case, specifically around the police shooting of Jacob Blake.

• Cedar Falls, Ia., which hosted a BLM March Monday on the University of Northern Iowa campus. “BLM everywhere! Everyday! And in every space!” organizers wrote.

(The map above shows locations of racial justice events in red. The black dots show Kenosha, Wis., where Jacob Blake was shot and two protesters were killed by a white supremacist; and Antioch, Ill, home to the killer) 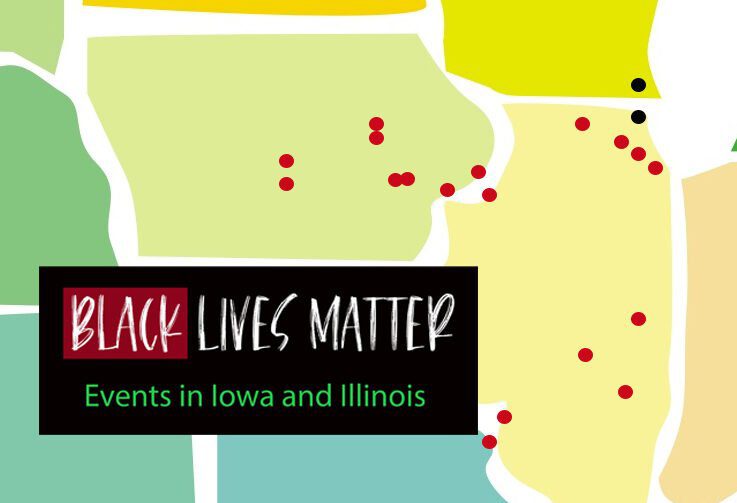