DAVENPORT — RAYGUN, the legendary Des Moines-based T-shirt printer and creator of one-liners, announced Friday it is opening a store in downtown Davenport.

Located at 2nd St and 2nd Ave., in the lower floor of the new Urbane210 apartment complex, the RAYGUN Davenport store will be RAYGUN’s eighth location in Iowa and Illinois.

“We’ve looked at several locations in Davenport over the years and waited for the right one,” said Mike Draper, RAYGUN founder. “I’ve always liked the vibe of the city in general.”

Draper said he’d been pondering a choice between Davenport and Rock Island for several years. He said the influx of contemporary businesses in downtown Davenport, including not just Raccoon Motel but also the men’s clothing retailer Theo & Co. and the nearby RiverCenter convention and event center, convinced him to go with Davenport.

Word of RAYGUN’s planned November 2022 opening of its 2,700-foot Davenport store drew praise from its neighbors and city planners, who have made downtown Davenport a focus for new businesses that generate foot traffic.

“Well, I’ll be excited to see what kind of ‘Raccoon Motel’ shirt they can come up with!” said McDermott. “But I’m thrilled. With the foot traffic they generate, they’re a great draw for a lot of people.”

Kyle Carter, executive director of the Downtown Davenport Partnership, said he first spoke with RAYGUN about a possible Davenport store more than two years ago. He said news that the opening is finally confirmed is like “a space ship just landed” in a district already prime for drawing more Quad Citians.

“To have a retailer of this caliber here is really going to set the bar for us,” he said.

A few of its shirts have also captured nationwide viral attention, writes the Des Moines Register, including a take on 2020 Democratic presidential candidate Kirsten Gillibrand being upstaged by a college student in search of Ranch dressing, and Mitch McConnell’s utterance of the phrase “Nevertheless she persisted” in silencing fellow senator Elzabeth Warren in 2017.

Draper founded the chain in 2005 and opened his first store in Des Moines in 2015. While expanding, Draper has also built RAYGUN into a unionized store that has consistently supported public education, LGBTQ+ affirmation, empowerment of BIPOC groups and businesses, and other progressive causes.

For a peek at some possible Quad Cities T-shirt phrases RAYGUN is already brainstorming, along with a chance to offer your own suggestions, go to this morning’s RAYGUN Facebook post. You can also submit 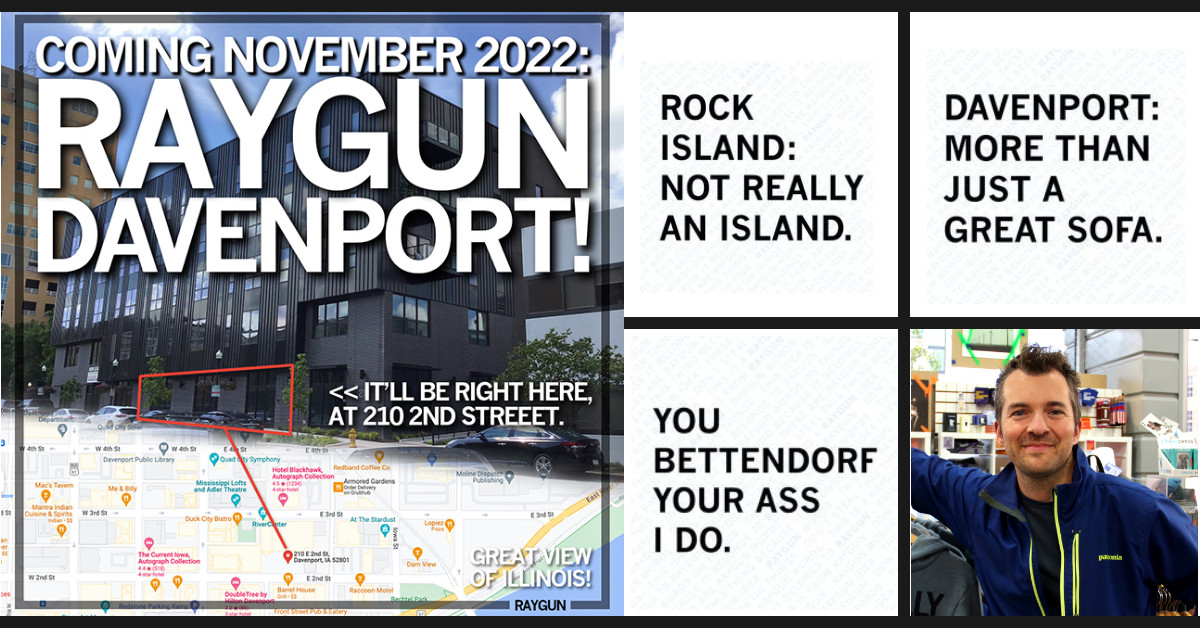