The hilarious image of SNL’s Mary Katherine Gallagher will forever be what I see first, when I see actress Molly Shannon.

The character of an over-eager Catholic schoolgirl trying dramatically and desperately to be the best she can be, at whatever she tries, eventually smashing into something nearby in a swirl of over-emotion expressed in a movie (or made-for-TV movie) scene, is dear to me, as it is for many Gen Xers who were SNL addicts during the Molly Shannon era of the late 1990s.

I see glimpses of Mary Katherine Gallagher peeking out of Shannon’s new role in “Wild Nights with Emily,” showing only once tonight at FilmScene, as part of the “Pride at FilmScene” monthly showcase of queer cinema. Shannon plays a reinvented, passionately lesbian version of poet Emily Dickinson, labeled for years as a “recluse” and a “spinster” who lived a dour lonely life.

Now that science has proven that Dickinson’s famous love “letter-poems” were written to her sister-in-law Susan Gilbert, whose name was literally erased from Dickinson’s writings after her death, a flood of historical fiction is starting to flow. This includes not only this film, but a new AppleTV series on the same theme: a re-imagining of what Dickinson’s life was really like as she carried out a lifelong secret, vibrant love affair and creative collaboration with her brother’s wife.

You spot glimpses of Mary Katherine in Shannon’s dramatic facial expressions as she tries to make sense of the nonsense she hears from publishers turning down her poems. You spot it in the over-the-top innocence of the high-cut white dress Dickinson wears almost daily in the film. And I swear, there’s a moment in the film that recaptures the iconic image of Mary Katherine Gallagher prancing about in her awkward gray “too long” schoolgirl stockings: when Dickinson races back from a daytime sexual tryst with Susan, her hoop skirt flailing high and flashing awkward gray stockings.

It was only after I reviewed this film that I learned of the many interconnections among Shannon, Dickinson, and the film’s director, Madeleine Olnek.

I learned that Shannon actually went to drama school with Olnek. That In fact, Shannon created her Mary Katherine character those many years ago while in school with Olnek, writes the New York Times.

And, that Shannon worked for years trying to “sell” the Mary Katherine character to mostly male producers, who all said “no” before Lorne Michaels finally said “yes” and let Mary Katherine Gallagher become a part of pop history.

Seeing a theme of female empowerment flow through Shannon’s work, long past her SNL breakthrough character, is repeatedly refreshing and a quality I most enjoyed about “Wild Nights.” Though clearly making a statement on behalf of LGBTQ people, this film also succeeds in standing up for women and all marginalized people who have ever been erased.

The theme of “erasure” so prevalent in this film is also the theme of “Hidden Figures,” all about the overlooked black women so pivotal to the success of NASA. It plays into the plot of “All Is True,” the imagined biography of William Shakespeare and the hidden writing talents of his daughter. It’s the theme of “Big Eyes,” about artist Margaret Keane, whose work was credited to her husband for decades.

As this film closes with the subtle sounds of Susan’s name being literally erased from Dickinson’s manuscripts, we’re reminded through screen notes that Dickinson herself was almost erased from literary history. The film points out that only 11 of her 1,800 poems were published during her lifetime, and that her work was largely discovered because of the posthumous efforts of her nieces and nephews, who apparently carried the inspiring written messages between Dickinson and her sister-in-law, while the two lived in houses side-by-side all their lives.

“Wild Nights with Emily” is a great selection for Pride at FilmScene – but it is so much more than a queer film. It’s salve for anyone who’s had to hide true love, or anyone who’s been suppressed, co-opted or erased. I strongly recommend making it to tonight’s 6 p.m. showing – the only showing available — if at all possible. 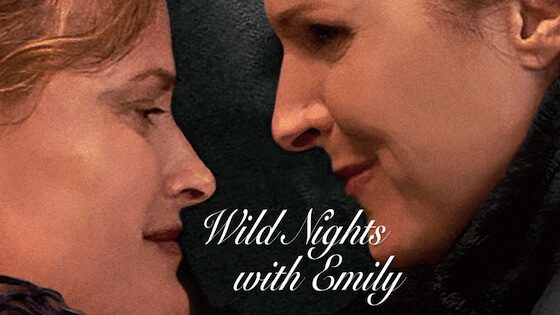