Why did women and gender-fluid people start up to 2,000 roller derby leagues worldwide?

I’m writing today about roller derby as a cultural phenomenon, a feminist and “inclusive” place to find like-minded people, showcase our strength, and be aggressive.

I have had personal struggles and triumphs over body image, a lack of self-confidence, and an angry fire inside of me due to years of oppression. I have been roller skating since I was 8, but never realized that roller derby existed until I saw the movie “Whip It,” a coming-of-age movie about a teenager that finds community and self-confidence within a roller derby league in Austin. I watched Drew Barrymore punch someone on the track and immediately knew that this showcase of positive female aggression was somewhere I needed to be.

Roller derby has become a way of life for myself and hundreds of thousands of people. I spend almost as much time practicing and supporting leagues as I do at my job. This sport has taught me that strength is the most important value above all, whether that’s my personal physicality or the development of the community. It gives me a place to be vulnerable, yet pissed off. It gives me a place to be muscular and strong with absolutely no care for what my body looks like.

The governing body of modern roller derby, the Women’s Flat Track Derby Association says that from the 1920s to the 1990s, roller derby was more like professional wrestling, filled with stunts and feigned physical drama. Today, roller derby is a full-contact cross between hockey and rugby without a ball. “It’s like football, but in roller derby, the jammer is the quarterback AND the ball,” I’ve heard people say.

It’s also a sport led and played predominantly by women and gender-fluid people. There are men’s leagues, but the governing organization is the Women’s Flat Track Derby Association.

Roller derby almost suffered a cultural death in the 1990s. The very early days featured athletes playing an edition of the game that is still related to the foundation of the sport today. Players raced around the rack and scored points when they passed each other, which is still how you score today.

But the resurface in the ‘90s focused on fabricated drama and poorly acted characters. Skaters were not a fan because this didn’t showcase their athleticism.

Roller derby was resuscitated by the Texas RollerGirls out of Austin, Tex. in 2003. This momentous occasion is presented with little fanfare by the group itself. “A bunch of strong, independent women showed up at a bar one day after a flyer was posted about starting a roller derby league, and the rest is history,” says one of their founding members

This is actually how most roller derby leagues started. These leagues are almost entirely started and run by the skaters themselves.

The rest of the world tells us we can’t do as well as, let alone better than, cisgender white men. We show that we can. The speed with which roller derby has grown since 2003 demonstrates this movement.

The Texas RollerGirls aren’t the only path-paving roller derby team. My current league, the Providence Roller Derby, is also a founding league. Iowa City’s Old Capitol City Roller Derby team has a long tradition of leadership. The Windy City Rollers, based in Chicago, was also one of the original leagues of the first governing body of roller derby, the United Leagues Coalition.

Roller derby has paved a worldwide path for female and gender-fluid athletes. No other sport supports and celebrates these athletes like roller derby.

In so many ways, roller derby tells the rest of the world something different than that world is telling us as women and gender-fluid people. The rest of the world, especially the patriarchy, tells us we can’t be strong. We say we can. 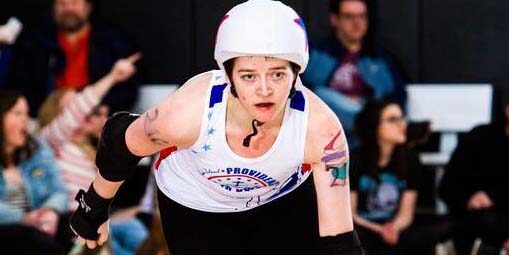