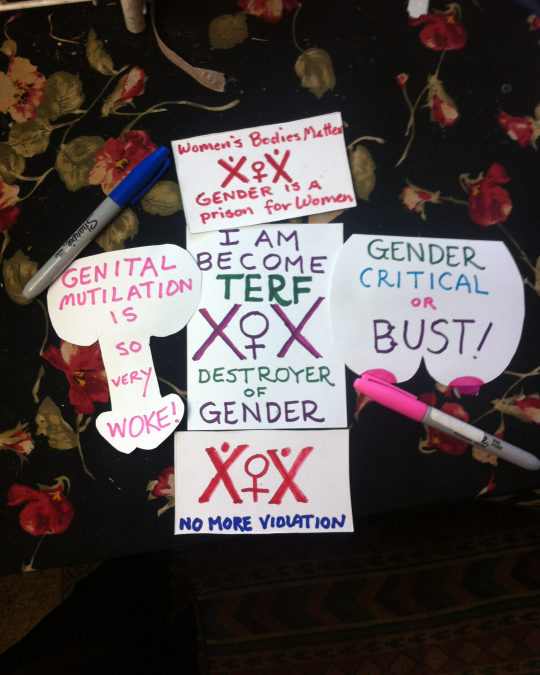 “We know that our movement is empowered when all of us lift each other up,” Sen. Kirsten Gillibrand said to the group gathered for the Des Moines Women’s March, inside the Iowa State Capitol.

In light of the burst of anti-trans activism among some leading lesbians, and the controversial racist rhetoric coming from some organizers of the Women’s March, my question for Gillibrand and other white, cisgender women is, “Who, exactly, is ‘us?’ “

Those damn pink “pussy” hats stimulated my internal conversation, along with other images of the annual Women’s March. These hats are a point of contention within the larger context of feminine identity, because they imply you have to have a “pussy” to be female.

As the trans community knows (and is trying to help feminists understand), not all female-identifying people have a vagina. A transgender person may, or may not, go through surgeries to change their bodies. Their decision doesn’t erase their actual identity, which transcends body parts.

Iowa City does not avoid this challenge. As some readers may know, a “Madam Nomad” has been putting posters throughout the city that carry anti-trans rhetoric.

Madam Nomad also has a website littered with transphobia. She even openly identifies herself as a “TERF,” or trans-exclusionary radical feminist, and a transphobe. Human beings, men and women, are not composed of interchangeable biobits that you can purchase from your friendly neighborhood corporate gender store,” she writes.

That diss is a reference to the University of Iowa’s LGBTQ clinic, which provides comprehensive healthcare to the LGBTQ community.

I’d be lying if I did not acknowledge that the university, like most others, functions like a corporation. But her characterization ignores the benefits of a comprehensive healthcare clinic for the LGBTQ community.

But more than that, I take issue with her main point. Actually, humans ARE composed of “interchangeable biobits.” Yes, you CAN alter your body – and not just your biological sex organs – for many different reasons.

Madam Nomad seems to believe she is standing up against “sexist gender roles.” But her whole premise of wanting to glorify the feminine actually reinforces them. Furthermore, she is equating one’s born sex to their gender.

It should go without saying that someone’s genitalia isn’t anyone’s business. Even moreso, it’s inappropriate to ask, discuss, or even have an opinion about any part of someone else’s body.

But when you are transgender, questions and discussions about your body come up much more often than for those who identify as cisgender. I’ve always assumed these questions are borne of confusion and misunderstanding. But let’s be honest: you can google it, and you’ll find the answers throughout history, science, and psychology.

When we throw sexual orientation into the conversation, this ideological confusion becomes more complex. Cisgender lesbians, in particular, are seemingly struggling.

Scarcella adds to the problem of mistakenly aligning sexual orientation with gender identity. She speaks throughout the video as a spokesperson for people who prefer vaginas. She offers that identifying as a lesbian is to be attracted to vaginas – more specifically, vaginas of cisgender women.

Through her rhetoric, a hierarchy of female bodies emerges. At the top are women that are “female-like.” At the bottom, apparently, are transgender women – and seemingly because they may have a penis. Undeniably, there is an aversion in the rhetoric of Scarcella and other anti-trans lesbians.

Preferences are not the issue that is pitting the Women’s March, Madam Nomad, Scarcella and the trans community against each other. Rather, it’s the politicization of the female body. In each of these situations, the rhetoric defines a “woman” as a person with a specific sex organ.

This is what creates that hierarchy of female identities, and also excludes the trans community from progressive spaces where they should be welcome to thrive.

I encourage us all to consider how we discuss our own bodies, and those of others. This hierarchy we are creating is harmful to the progressive spaces that we all so badly want, need, and deserve.