Not what I expected when I came into work at the hospital tonight.

We are starting our night shift, when we learn that the movement many of us have thrown our complete (well, almost complete) support behind is outside vandalizing our building.

We gathered for George Floyd, put out statements of solidarity, shared support on social media– I know nurses who even served as medics during Iowa City protests.

We were confused, some of us angry. Many still are. Healthcare workers who otherwise are allies to the movement asking: “What did WE do to deserve this? We are the helpers! Our patients did not deserve this. This time, they went too far.”

This was not personal. This is the result of a deep collective pain that, whether we like to admit it or not, resulted from systems we not only work within, but directly benefit from.

Black people receive lower quality care; are more frequently uninsured; have more co-morbidities such as diabetes, hypertension, and asthma; have less access to treatment; are not believed; and die of preventable diseases more frequently and faster than white people.

Was this a perfect expression of that message? I don’t know. Was it directed at the right people? Maybe yes, maybe not. But I’ve come to understand that anguish, despair, hopelessness, are many times raw, messy, unpleasant — even ugly.

Kinnick Stadium and parts of UIHC look terribly ugly now. But expecting people to package that expression as anything else is demanding they only express themselves so long as WE don’t feel uncomfortable. If, as doctors and nurses, we are more offended by the ‘F word’ than the gross racial inequities in our healthcare system, then we are the problem. We need to do better.

Some also are voicing concern that these protestors blocked traffic to the hospital. First of all, the official reports are that no hospital functions were disrupted, and cars attempting to enter the emergency room were let through.

I once again ask: HAVE YOU SEEN THE TRAFFIC ON FOOTBALL GAME DAYS? It is socially acceptable to *completely* block hospital traffic every weekend for *half a day* for. almost. half. a. year.  But a crowd demanding racial equality can’t walk through once? You’re not concerned about patient safety, you’re concerned about football. Talk to me about obscene.

Yes, this sucks. Due to COVID-19, our hospital is financially in the hole. Cleaning this graffiti up is going to cost money. Nurses and staff are already looking at salary cuts. This doesn’t help. There’s undoubtedly collateral damage here.

It’s okay for you to be mad about it. It’s okay if it doesn’t sit well with you because, yes, it sucks. But what also sucks is that, compared to a white man, a black man who walks into the hospital is more likely to leave in a body bag.

Eric Kusiak, guest columnist, is a staff nurse at University of Iowa Hospitals and Clinics. This column is reprinted from Eric’s Facebook feed with Eric’s permission. Photos courtesy of Lindsey Loy. 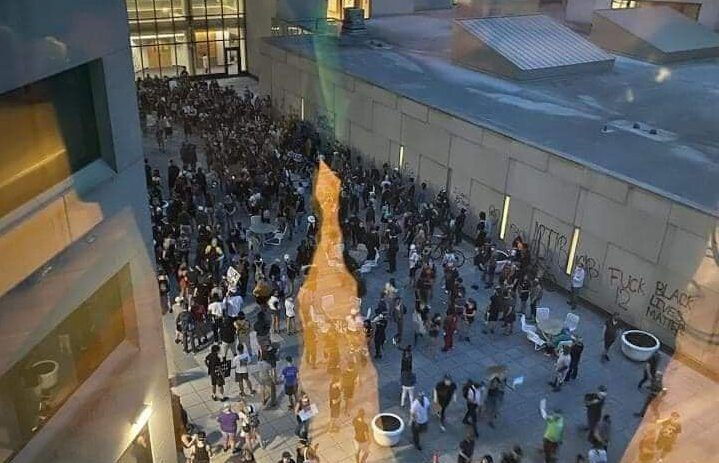