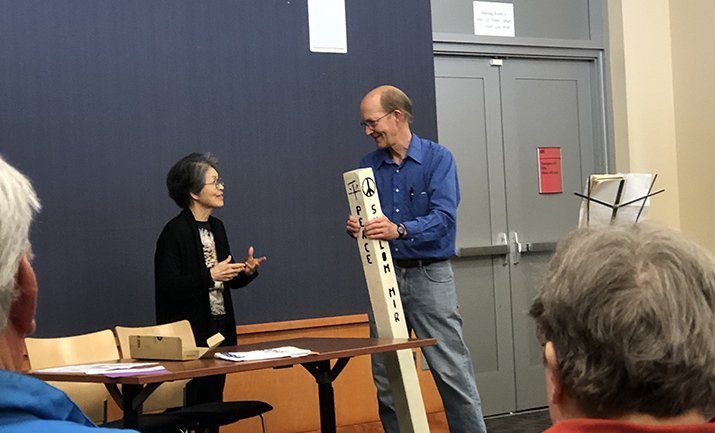 Earlier this year, Air Force veteran Daniel Hale learned he may face 50 years in prison for giving information about weaponized drone attacks to a reporter.

Two hundred years ago, Quaker Seth Laughlin was tortured by his fellow Americans when he refused to join the Confederate Army.

These two situations, hundreds of years apart, illustrate that conscientious objectors against war are timeless.

They are still saying “no.” And groups like Veterans for Peace in Iowa City are doing their best to ensure the rest of us remain aware.

The VFP-161, as it is known, took some time to honor both Hale and Laughlin at its July Conscientious Objectors rally, which has been held since 2015. The ceremony also included songs by Leah Stitt and Cheryl Weatherford, a group blessing of peace to each country individually, and a letter from a member’s father while serving as a soldier in 1941.

He had written letters home to share the feelings war created in him.

“Does man really ever learn anything? Of course he does, and I have not lost hope.

“I still believe firmly in the essential goodness of man, but one cannot help but be disappointed ….”

The VFP is continuously gathering for peace, praying for peace, and demonstrating against war practices. Its next event is an Aug. 9 rally in Des Moines against weaponized drones (a carpool is being organized from Iowa City). Its next regular monthly meeting is Aug. 13.

Putting a human face on conscientious objectors is one of the most important things VFP does, says leader Ed Flaherty. He says it’s important to keep alive the memory of Hale, Laughlin and other peace-promoting whistleblowers or objectors.

“They existed. They suffered. And they transcended,” he says.

“We draw on our personal experiences and perspectives gained as veterans to raise public awareness of the true costs and consequences of war,” he writes, “and to seek peaceful, effective alternatives.”

Veterans for Peace also keeps a running watch on the statistics of war funding:

• The growth alone is almost as much as the federal government allots to the Centers for Disease Control, the National Oceanic and Atmospheric Agency, and the Environmental Protection Agency.