IOWA CITY — With the 2020 murder of George Floyd, and the trial of the officer who killed him, a program I started as a high school writing program has become an escape, an outlet, and a way to deal for the young writers who are participating.

Click here to read Aidan Spurgetis’s “Out of Sight”

Over the past year, IC Speaks and our members have dealt with a pandemic, and an explosion of political conversation happening worldwide.

In some cases, I had BIPOC students writing pieces about the anger and pain they grappled with daily. In other instances, I had white students writing about the growth they’re having, the dissonance they feel with their families, and the guilt that lingers under the surface.

Together we found ourselves writing about protest, and posing the hard question to ourselves, “what can we do?”

We dove deep into conversations that did not always come to a clear conclusion. For example, when we had a workshop centered around the Atlanta spa shootings, we tackled the ideas of intersectionality and the different experiences of racism between people of color.

One of my students spoke on the struggles of being Asian American “We get killed. It may be new to you, but I knew this already. It just isn’t publicized the same since we’re the ‘model minority.’ ”

In the same workshop, we explored a prompt on white male terrorism. Clarke, a white transgender male, cracked open a conversation that would have gone undetected.

Together, we tackled this complicated question; sharing our perspectives, listening to others, and in the end, acknowledging we all have more to learn about the topic.

The beauty was in the opportunity to safely talk about the unknown—the things we’re still learning. Each student thanked each other for such an insightful conversation.

For a little background: I started IC Speaks in September of 2019 wtheith the initial purpose of bringing spoken word poetry to the Iowa City school district.

I believe passionately in spoken word poetry. Ever since I first found the stage at age 16, it changed my life. I hoped to provide the same opportunities to this generation’s young people.

We started off strong, hosting a weekly workshop at City High School along with West, Tate, and Liberty. More than 70 high school students joining in total.

Then, as we all know, COVID hit. With us all isolated to our homes, forced into online schooling and the concerns of a global pandemic on all of our minds, I was sure IC Speaks would fall to the wayside.

I reached out to my students and asked them, “should we give IC Speaks a break, or would you all like to try this virtual thing?” To my surprise, the response was an emphatic, “let’s keep going!”

Only when we began meeting weekly, and virtually, did I understand where my students were coming from.

“This is always my favorite Zoom of the week,” some said. Others said nothing yet their consistent presence spoke for them.

One of my students, Billy, attended nearly every meeting with their microphone cut off, headphones in, and never spoke out loud. At first, their silence seemed an odd choice during a spoken word workshop.

But then, Billy told me their guardians didn’t really like them attending IC Speaks workshops because they thought we (and writing in general) caused Billy’s queerness.

Billy’s silent presence signified that even with the threat of home harmony on the line, they needed a place to be themselves. The pandemic made it harder, but not impossible.

Similarly, another student, Skylar, joined every meeting they could, video on and mic out. During one workshop, they seemed extra unsettled, shifting in their seat and eyes looking elsewhere.

I sent a private message to check in; they shared that their guardians were arguing in the background. I assured Skylar that they could leave the workshop if they needed to, but they said the virtual space of IC Speaks is where they’d rather be.

Over a year has passed now since I thought IC Speaks might need to end. Instead, it is living, and even growing. The students who joined from the start have not only invited their peers; they’ve each grown individually in the safe space of our weekly meetings.

The pandemic may have pushed us far apart and recent events like Chauvin’s Trail, Daunte Wright’s murder, and the pepper spraying of an army veteran may continue to challenge our sense of community,  but art will always pull us closer by offering security and a space to search for answers. 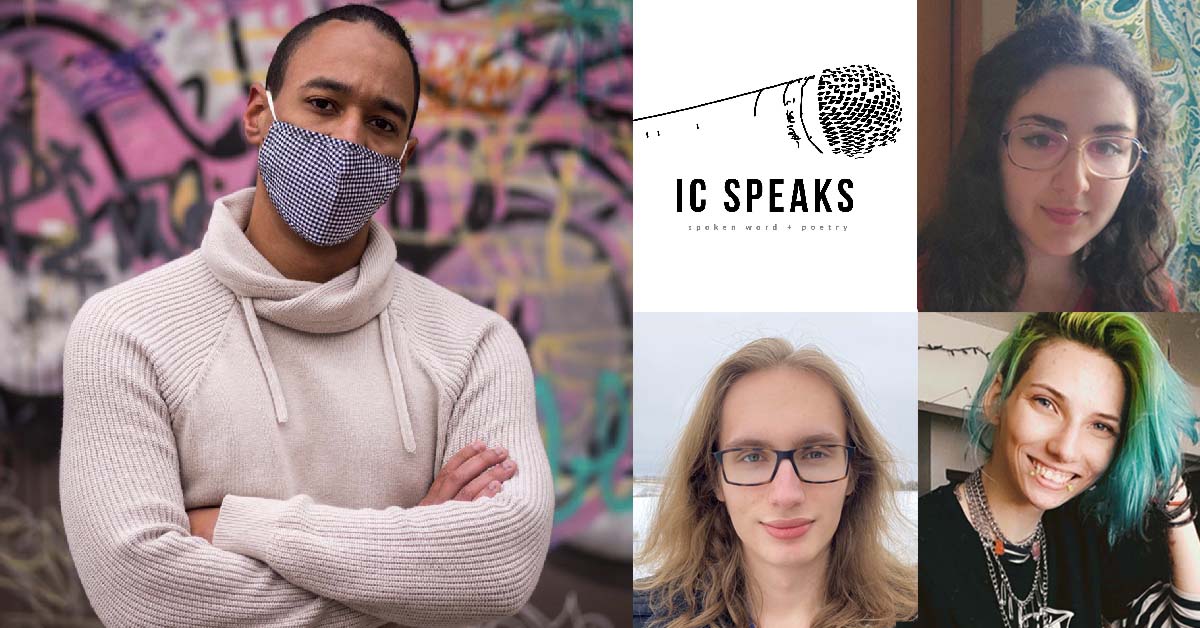