The inclusive, empowering sport of roller derby is becoming a vehicle for indigenous women to speak out and make a difference.

Players right now hail from not only Iowa City, but also Florida, Arizona, Colorado, Maine, and Alabama; Calgary and Edmonton in Canada; and British Columbia.  America’s Navajo, Odawa and Dene people; New Zealand’s Maori people; and Hawaiians and other Polynesians are represented so far, Bennet says.

“It has a lot to do with educating the world and maybe first-world countries,” says Jennifer Bennet (skater name Windigo), who lives in Milwaukee. “We’re educating the greater world that these artificial boundaries were violently and exploitatively placed upon us.

“And that on top of that, we’ve been systematically denied full representations, full equal rights, full enfranchisement in terms of voting capacity, economic freedom, and anything and everything that you need to function in civil society. This has created a centuries-long inequality in society.”

A 2016 Department of Justice study showed that 84 percent of Native American women have been assaulted. Indigenous women are especially vulnerable to assault because standard law enforcement agencies do not have jurisdiction over reservations, where crimes are not closely tracked.

The inequality and complications can extend into the sports world, Bennett says. And that’s why roller derby is an apt vehicle for indigenous women to express their overall stance of activism and education.

For one, most of its teams are self-governed and nonprofit, compared to the “super-capitalistic” models of professional teams, with hierarchies that place owners at the top and players at the bottom.

“I don’t think this would have happened in any other sport,” Bennett says. “Roller derby functions outside of traditional sports networks and economic models. It emulates a more democratic system.” 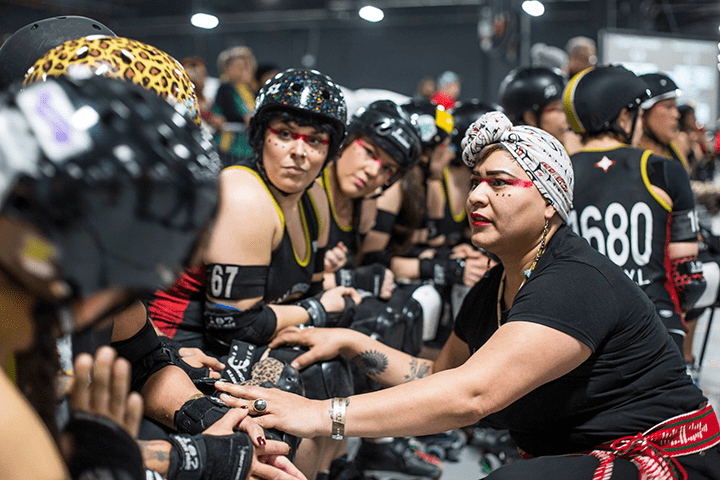