In a year when more than 400 Pride parades and events have been forced by the coronavirus crisis to reschedule or cancel, a smorgasbord of digital and socially-distanced Pride events are still happening, both locally and nationally.

A few entities, such as the Metro East Pride group in Belleville, Ill., are also still planning on holding physical Pride events sometime this year. Here’s a rundown of how you can celebrate Pride, an LGBTQ tradition built around the Stonewall uprisings in 1969 in response to police brutality:

• Wed., June 3: OutSports in Philadelphia kicks off a month of five panels, exploring different aspects of LGBTQ sports including homophobia and transphobia in sports (June 3); an online variety show featuring out LGBTQ athletes (June 11); how to embrace LGBTQ fans (June 16); chats with aspiring LGBTQ Olympians (June 24); and LGBTQ athletes who have become involved in politics (June 25).

• Fri., June 5: San Francisco honors its 50th anniversary with “Pride at Home SF,” a gathering of performers and elected officials. The event is co-hosted by San Francisco Pride and the Office of Transgender Initiatives. Any proceeds from this virtual event will go to food relief efforts in the Bay area.

• Fri.-Sun., June 5-7: Aurora Pride in Illinois encourages residents and businesses to join in “Chalk With Pride.” Residents are encouraged to “chalk” their driveways with Pride themes, and businesses will offer Pride displays for this entire weekend.

• Fri., June 5: The National Liberty Museum kicks off a series of Pride Month events with an 8 p.m. virtual gathering described as a “delightful, raucous, and educational night of lightning Tedx-style lectures followed by steamy burlesque performances.” The evening kicks off a month of virtual events at the NLM including a weeklong virtual exhibition of “Transparency,” the nation’s first museum exhibition of studio glass works produced exclusively by LGBTQ artists (June 15-22); Pride Trivia (June 16); and a “Dear Straight People” panel discussion (June 5).

• Sun., June 14: Woodstock, Ill., hosts its first-ever “Pride Promenade,” from 11 a.m. to 3 p.m. featuring a walk through town and displays of LGBTQ pride. Actually, you’re welcome to walk, drive OR bike through Woodstock.

• Sat., June 20: Join the Virtual Rainbow Run hosted by Twin Cities Pride. Choose your own time to run anytime between June 20 and 27, then register your time on the registration page! Prizes will be awarded for fastest run and best dressed; register by June 5 to receive shirts and bib numbers.

• Sat. and Sun., June 20-21: Denver Pride holds a two-day event that starts at 8:30 a.m. June 20 and continues throughout the evening. The schedule includes authors, performers, draq queen story times, a virtual parade, a virtual 5K, a rally, and more. Watch its Facebook page for more.

• Sat., June 27: Global Pride kicks off at noon. This massive online extravaganza is a collaboration of Pride organizations nationwide. Enjoy speeches, performances, film and other content from Prides in Africa, Europe, Asia, Oceania, and South, Central and North America, all coordinated by a team of more than 100 volunteers. Watch its Facebook page for more.

• Sun., June 28: NYC Pride had to cancel its 50th anniversary celebration, but it will team with the local ABC affiliate for a broadcast event from noon to 2 p.m. featuring celebrities like Caron Kressley and Dan Levy. Watch the group’s Facebook Page for more.

• Sat., Aug. 1: Belleville, Ill., still plans at this point to hold its Metro East Pride Fest on this date. The group is also considering an online drag show on June 7, the date of its original Pride event, and encourages the public to watch its Facebook page for ongoing updates.

• Sat., Sept. 19: Decorah Pride in Iowa tentatively aims to hold is third annual Pride celebration on this fall Saturday. The event is traditionally held in May. Watch the group’s Facebook page for more information.

• Oct. 17: Southern Il PrideFest in Carbondale, originally scheduled for June, is now aiming for this date. Watch its Facebook page for more information.

• Cedar Valley Pride in Iowa’s Waterloo/Cedar Falls area decided Monday it will cancel its late August two-day event. For more information, watch its Facebook page. The group is exploring a “Pride Inside” art show and other online activities to celebrate Pride; watch its website at www.cedarvalleypride.com for more.

• Though Iowa City Pride has cancelled its 50th anniversary celebration, originally scheduled for June 19-20, it is celebrating this year with colorful Pride banners throughout the downtown area. Watch Pride’s Facebook page for more information.

• Key City Pride has cancelled its June celebrations this year in Dubuque, Ia. Watch its Facebook page for updates.

• Mason City Pride in Iowa announced Friday it has cancelled this year’s festivities, originally planned for Aug. 15. The group is exploring online activities; watch its Facebook page for more information.

• Quad Cities Pride on the Iowa/Illinois border has cancelled its events, originally planned for the end of May. Watch its Facebook page for more information. The group is still planning on holding its September Fall Pride events.

Does your community have an LGBTQ Pride event that is not listed here? Let us know at reachus@therealmainstream.com! 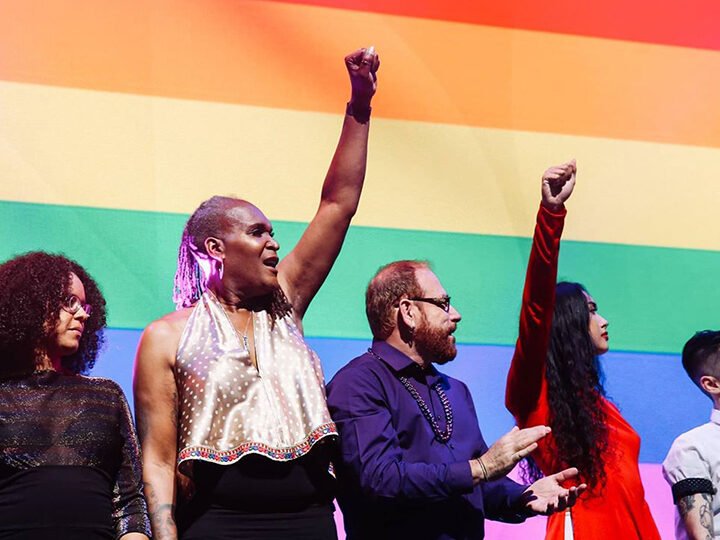