The first-ever gender policy for the organization that helps roller derby grow worldwide came out in 2011. It was clinical, and harsh.

If you were not assigned female at birth, the policy said, a healthcare provider had to verify that your “sex hormones are within the medically acceptable range for a female.”

My most recent article about my love for roller derby described the significance of the sport in terms of feminist empowerment and gender inclusivity. This time, I am writing to share that as much as roller derby has done for women, the early community was not as kind to people that are not cis-gender females.

To be fair, gender has been at the forefront of discussion at the highest level of the Women’s Flat Track Derby Association, its board of directions. But we still need more transgender individuals in our actual leagues and on our teams. We need more actual inclusivity in 2020.

The gender tone deafness of the WFTDA is evident in its own title, and in the leagues formed in the early days of roller derby. Most of them feature the words “girls,” or “women.” The official start to modern roller derby is reported as 2003, so waiting until 2011 to release a comprehensive gender statement is a notable delay.

The WFTDA’s early focus on medical confirmation is discriminatory. Countless trans people cannot access, or don’t actually desire, hormone modification. And truthfully, your gender identity has nothing to do with your health history, or your born gender.

Caesar, the writer who first explored WFTDA’s gender statement and policies, mentions that the early policy was created with the best of intentions. Leadership asked “medical professionals, academics, attorneys, and organizations” for their input.

I have to ask: where were the trans voices?

I still have to ask, yet again: is the trans and nonbinary community playing an active role in inclusivity?

There is at least one trans voice working with WFTDA’s leadership on behalf of transgender and nonbinary individuals. Gloom, a transgender woman that chairs the WFTDA Diversity and Inclusion Committee, is a member of the Fort Wayne Derby Girls. She’s transparent about her experience as a transwoman in roller derby.

“I, like so many of my transgender siblings, have endured discrimination and bigotry since coming out,” she wrote in a statement on WFTDA.com. “I have been assaulted, violently misgendered, disparaged, and excluded from women’s spaces. This kind of discrimination and bigotry — whether it is latent transmisogyny, transphobia, trans-exterminationist radical feminism, biologial essentialism, or so-called ‘gender-critical’ attitudes — has no place in the WFTDA, and the organization stands in solidarity with the transgender community.”

I have never been assaulted by anyone in the roller derby community. And no one’s ever told me I couldn’t be in a league because I’m not female.

But the lack of representation for my nonbinary identity erases my existence. I am misgendered constantly on and off the track, despite stating my pronouns all the time. Sometimes it’s malicious, sometimes it’s not.

Though it’s great to see the WFTDA as an organization advocate for trans and non-binary individuals, exclusion still exists on a league level. Female-centric language and imagery are rampant, when that isn’t representative of gender fluidity.

If WFTDA and the leagues are to retain their representation as a gendered sport, they will push gender-fluid people away. Female-centric language and logos are inherently exclusionary in a space that labels itself as “LGBTQIA+ friendly.” It’s not enough that nonbinary and gender-fluid people are “allowed” to exist and participate on female-oriented terms. We need more.

I feel welcome in the roller derby community. But this year, I will take ownership of a sporting space that reflects my identity. 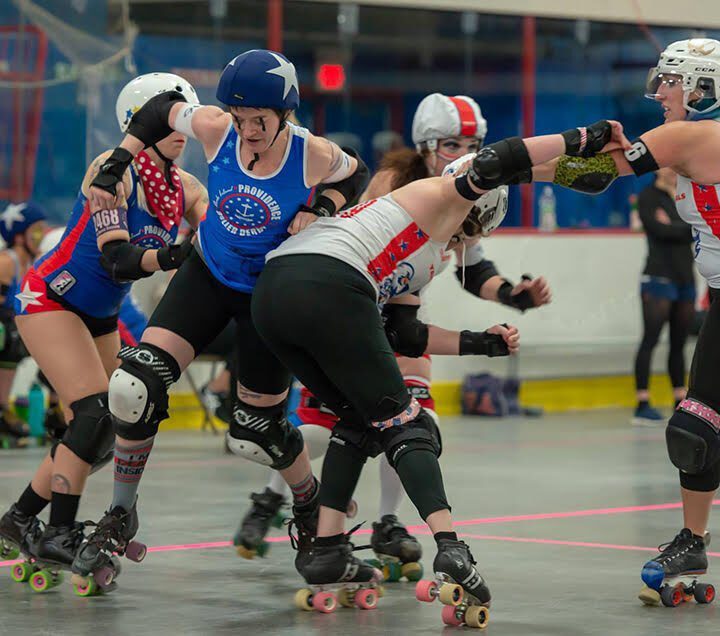