I love how the universe works.

Just the other day, over the holidays, I took the time to watch “Richard Jewell.” It’s a movie about the over-zealous, low-self-esteem, naive 30-ish guy whose unusual personal views left him the perfect target to be accused of the 1996 Olympic Park bombing from which he actually saved scores of people. Jewell was manipulated by law enforcement and mistreated by the media; the very cops he idolized and cared for turned on him publicly as an easy scapegoat.

We have a slight parallel developing in Iowa City. Only our “Richard Jewell” is a confident, successful, streetwise woman, whose unusual views make her the perfect target to be accused of “marching with Nazis” by a group of protest-hungry liberal/far-left armchair activists, and their social media friends. Our local Jewell equivalent was mistreated by the media, yes, but their other oppressor isn’t law enforcement: they’re being attacked by fellow left-leaning people like herself, some of her own customers over the past 16 years, who are turning on her publicly.

Our Richard Jewell is shaping up to be Kelly Stucker, owner of The Konnexion glass shop.

If you’ve met Stucker, you know she has an unusual charisma. A confidence that can feel almost nonporous. A flippancy that can feel cold. A refusal to censor words or say something just to get by. A willingness to piss you off that, quite frankly, can be off-putting. (Editors’ Note; similar descriptions applied to self).

Talk to her a little longer, and you find a voluntary spirit to self-examine. A spongey thirst for more information, more knowledge, more context. The eventual acceptance to say “I was wrong,” even if it was hard for her. A delicacy behind the strong front that you will find in most women who have paved a difficult path in this still-patriarchal world. A comfort with being honest, even if it’s not popular. A willingness to get into the weeds and debate, and even learn.

But right now, Stucker is having to consult with her attorney after a growing number of social media commenters flippantly, while poking around on their phones, encouraged each other to maybe report her to the FBI, or the state attorney’s office.

It’s all because of a rumor post that a few armchair do-gooders circulated all over town. It lumped Stucker and her shop in with an actual confirmed, photographed attendee of Wednesday’s Trump-supporting protest, that had nothing to do with Stucker. Nevertheless, the rumor post went viral, triggering a call on social media to boycott Stucker’s shop. A Des Moines Register reporter picked up on the rumor post and, oddly and irresponsibly, printed it — then put a correction ATOP the article (highly unusual; corrections usually run at the end of an article).

But the damage is done. The rumor post has been circulated so deeply, and is now so accepted by so many as fact, that it might as well be a QAnon post about election fraud. Undoing the rumor mill will be a long-term task now. Who knows what damage the initial rumor post, and the many repostings, and the resulting article and correction, may trigger?

For the record (which so many have conveniently decided doesn’t matter here): Stucker has never tried to hide that she was in D.C. on Jan. 6. She was there to uphold her somewhat controversial views: she’s a gun rights advocate. She believes on-and-off COVID shutdowns have been devastating to the economy, and especially small businesses and their employees, and favors a short-term, full-out, subsidized lockdown that ensures workers are all paid without risking their health. She objects to the millions of dollars going overseas in the stimulus bill. She supports $2,000 to needy Americans, at minimum — and actually supports monthly support for Americans during a brief intense shutdown. She doesn’t support Trump, but couldn’t bring herself to support Biden, and says she voted for Kanye West in 2020.

Many of those now attacking her agree with many of those views. They’d learn that if they had bothered to explore their accusations before circulating them. But instead, Stucker has been prowled for three days now. And the witch hunt is growing.

This started over accusations that she “marched with Nazis.” But now, in typical pile-on fashion, Stucker’s accusers are pulling out a list of ‘isms. She’s being accused of being transphobic and racist. Speaking like little baby Trumps, those attacking her use phrases like “it’s known” and “and we’ve all known it” — with NO documentation to support their big broad brushes and smears. Some have even acted offended at being asked to present actual proof.

Stucker left social media in June after Round One of being attacked for her libertarian views. Friends and people familiar with her are the ones left to speak up on her behalf. During Round One, though Kelly and her businesses are advertisers with The Real MainStream, I kept myself and this publication out of it. As an advocacy journalism operation that still places the basics of journalism first (attempted objectivity), it didn’t seem appropriate to engage the first time around. Instead, we observed, and documented. The first time around, scads of social media commenters did exactly what they are doing now: pulled out a list of “isms” that went far beyond the initial accusation, which was that Stucker had been unsympathetic to her employees by staying open as the law allowed her to during the pandemic. And just like now, actual proof of these accusations doesn’t accompany them.

Round One took things an ominous step further: someone busted the windows of her business, while she sat alone inside.

So this week, accusing her of being part of the D.C. mob that broke windows at the Capitol is more than playing with fire.  It’s truly messing with someone’s safety. It’s more like grabbing a can of gasoline and gleefully scattering its contents all around you and your neighbors, when at any moment some careless person could come along with their one tiny verbal or social media spark and make everything much, much worse.

That’s why this time, I’m dipping in personally, and The Real MainStream is speaking out through this editorial. I would do the same if it were a non-advertiser being attacked under these circumstances, even if my worst opponent was experiencing what she is. Because these self-righteous finger-pointers are doing the same to Stucker that we’re all asking Trump to stop doing, along with his over-privileged followers: we’re asking them to stop stereotyping the “other,” stop operating on rumor and innuendo, stop drawing large conclusions based on limited surficial information you didn’t bother to explore, stop boiling it all down to “us versus them.”

This new round is now a case where we need to live up to our Mission, and the Four-Way Test, applying it to the real world and without toxic positivity. So here we go:

Two deep ironies are developing in the wake of “Pile on The Konnexion Round 2:”

Irony #1: In November, when we printed an article about data showing increased support in 2020 for Trump among LGBTQ people, Blacks and Latinos, I got a little lecture about how marginalized people are diverse (because as a lifelong No Party Affiliation lesbian woman, I needed that lecture ….eye roll). But here we are today, with a white woman being lumped in with Nazis, and her business threatened with boycott, simply because she attended a controversial rally that became something she did not support. This “give me my justice — but don’t give it to that white woman over there” may be en vogue, but it’s wrong.

Irony #2: Even while a group of Iowa Citians are piling on Stucker and The Konnexion, another group of Iowa Citians is literally joining the Trump administration and his followers in misleadingly spinning Wednesday’s insurrection, asking their followers to carefully message the illegal use of force to overpower law enforcement as something other than terrorism. So much angling going on. Some folks are trying to support both of these views at once, condemning Stucker for even being in D.C. on Jan. 6 while also becoming complicit in falsely spinning Wednesday to protect actual domestic terrorists.

By taking this stance on behalf of more careful and fact-based activism, will this publication now be the subject of boycott? Will someone soon comment with today’s favorite diss and gleefully call me a “Karen”? Probably. But like every person I respect ever taught me, doing the right thing is rarely the easy thing.

We will champion the cause of stamping out rampant rumor fires at every turn, and look forward to the day when more of Iowa City’s progressive, leftist and liberal community joins in an overall commitment to do their work more honorably than Trump and Trumpers. As Owen Glieberman wrote in his review of “Richard Jewell,” “rumor, innuendo, and accusation without evidence are egregious…. and that what matters, more than anything, is the truth.” 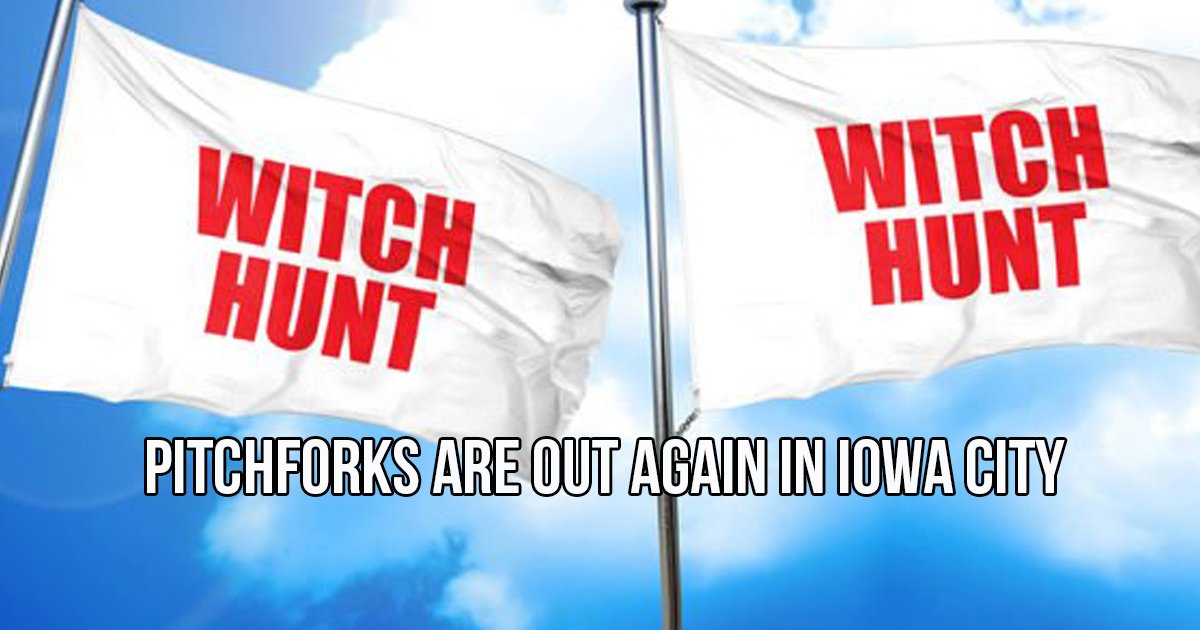